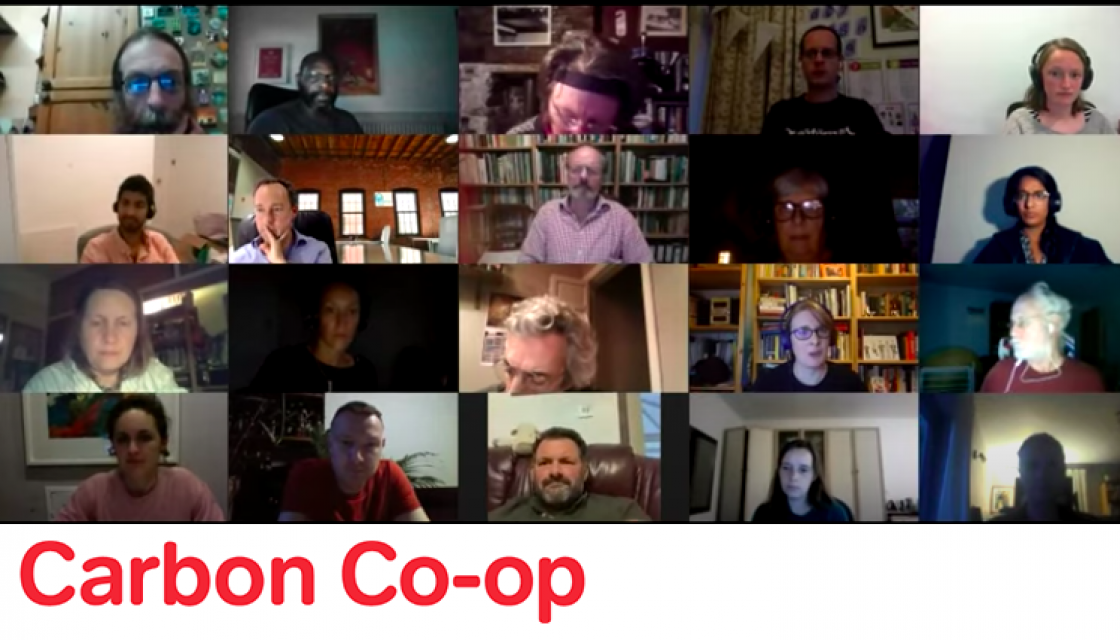 Since the Covid-19 pandemic hit, many co-ops have had to adapt so much of their member engagement, including moving AGMs online.

We spoke to Carbon Co-op’s Jonathan Atkinson, who below shares his experience of hosting their first online AGM after exploring a number of options.

For those holding an online AGM we have a page with guidance plus we’re hosting a FREE one-hour webinar on 17 November on how to run an AGM.

What was our initial reaction to moving your AGM online – how have you run AGMs before? Have you offered online before?

We have run physical AGM meetings in the past and worked hard to make them as social and interactive as possible. We usually get 25% of the membership attending and an equal number of non-members along as well. Last year we had around 100 attendees (members and non-members) at the Manchester Friends Meeting House – and combined this with a debate on the Green New Deal.

We’ve always wanted to offer online participation at the AGM but never got our heads around the logistical and technical details of how it would work.

With our AGM date coming up, there was a lot of discussion within the board as to whether we could go ahead and we consulted the Co-operatives UK advice team a fair bit. So, in the end we decided to go for it.

How did you decide which online platform to use? And what were the important considerations for you?

We had a few requirements. Anticipating around 100 attendees again (our membership is now 240 people). We wanted to use a platform that would:

We looked at set-ups such as having two parts of the meeting with one member only or another whereby members could participate and non-members watch a YouTube stream, but that felt like we’d be marginalising non-members and limiting their involvement.

A large Zoom meeting seemed to fit the bill with the ability to share audio and camera feeds – a webinar can become quite impersonal as you can’t see peoples’ faces or easily hear from them. But Zoom voting couldn’t be limited to just members.

We also looked at various voting options that involved emailing people links and passwords – but this didn’t appeal because people frequently mislay or don’t open or receive emails limiting involvement.

That’s when we were recommended the Slido system by a friend on Twitter. Slido facilitates online comments, Q&A and voting. Importantly, voting could be limited to a bounded email list, so we could upload our membership email list to Slido and limit voting to just those people.

Finally, we used Google Jamboard – an online shared whiteboard – to gather feedback at the end of the session.

How did it go? What worked well? Were there any issues?

It all worked really well. We had over 100 attendees on the Zoom:

The thing that pleased me most is that the vast majority of people stayed for the whole session – the AGM and the debate that followed – and we didn’t get a large drop off in people after the AGM. It is remarkable to have nearly 100 people discussing decarbonisation housing policy on a Friday night!

We also got participation from around the UK which was great and hopefully inspiring to others.

My favourite bit is the Jamboard feedback that you can see being populated live after the event.

Do you think you’ll offer online viewing/engagement for future AGMs, even when you’re able to run physical AGMs again in future?

It’s a tough one because the advice is not to mix online and physical events as you create two classes of participants and the online people become excluded. But it would be a shame to lose the physical interaction and meeting – which is something people have commented that they want. Perhaps the AGM is virtual and we have another physical meeting after or in the run up?

Do your thinking in advance. Ask for advice – use Twitter and other social media to engage with other co-operators –- here and around the world – and also tech professionals from outside the co-op sector.

You can see a video of the evening here: carbon.coop/carbon-co-op-agm-2020/

Find out more about Carbon Co-op's work at carbon.coop

Back to case studies