In partnership with The Co‑operative Bank 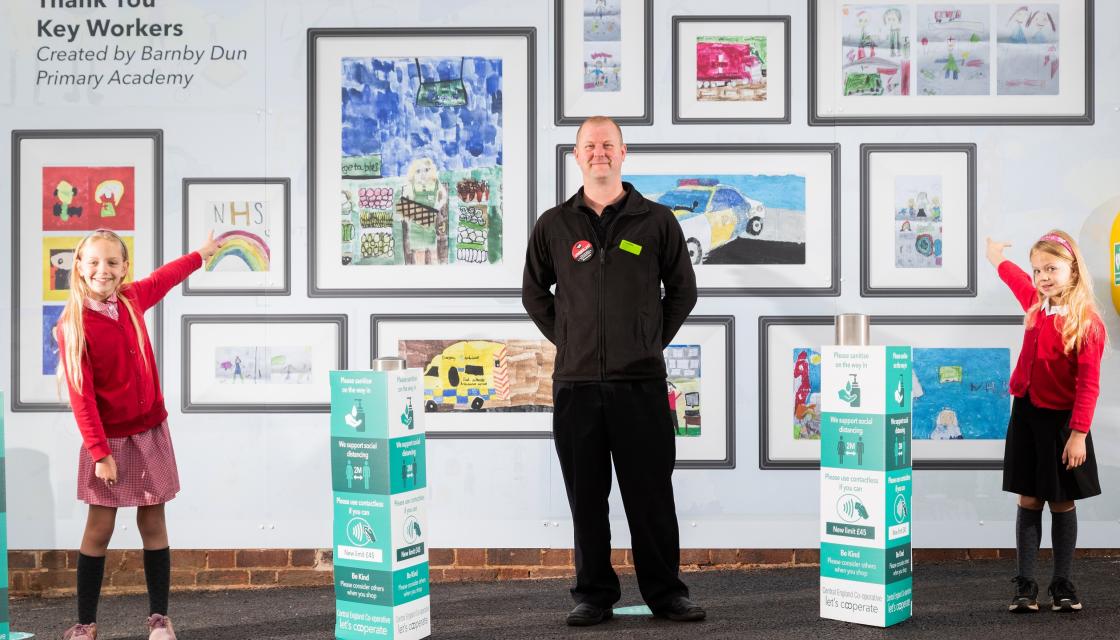 New categories, thousands of votes and more proud winners than ever before – the Co-op of the Year Awards 2021 are once again celebrating the power of co-operation – which has risen to the fore in response to the Covid-19 pandemic.

These prestigious prizes are awarded annually to recognise the achievements of co-operators and co-operative organisations across the country.

This year, due to the pandemic, there is no ceremony. But we’ve made specially recorded winners’ videos so everyone can find out more about them and see their reactions to being awarded their coveted gongs.

There are several winners of Lifetime Achievement Awards that recognise individual contributions to the co-op movement. Two have been given posthumously to former Chair of the Co-operative Party Chris Herries and former Chair of the Co-op College and Newcastle Labour/Co-op councillor Nigel Todd. Other lifetime achievement awards have gone to Elaine Dean, Vice President of Central England Co-operative and Ed Potter, founder of Delta T Devices.

More than 35,000 votes were cast in the national awards, organised by Co-operatives UK and supported by The Co-operative Bank, which were combined with judges’ scores to decide the winners. The judging panel was made up of representatives from different co-operatives, with nominations and votes coming from large and small businesses, members, customers and co-operators across the sector.

Remote video URL
Watch a video celebrating all the winners

Huge congratulations to all the winners of this year’s awards. They – and all on our shortlist – are wonderful examples of how working co-operatively creates resilience and prosperity, provides support to others in times of crisis and gives us the means to build back better from the Covid-19 pandemic.
– Rose Marley, CEO of Co-operatives UK

Leading Co-op of the Year

Central England Co-operative scooped the Leading Co-op of the Year Award – for co-ops with a turnover of more than £30 million. Employing 7,800 people at more than 430 outlets, it has more than 165,000 active members. Its work with food banks over recent years has seen enough food donated to create over 2.1 million meals per year. And it has given out Community Dividend grants worth £175,000 to 116 groups.

Inspiring Co-op of the Year

This year’s winner in the category for co-ops with a turnover between £1m and £30 million is the Co-Pilot Wind Project. A ground-breaking co-operative, it is on a mission to make green energy ownership easy and affordable. It has 800 members throughout the UK who have invested in the Graig Fatha wind farm in Wales – to have the energy it produces supplied to them via the national grid.

Small Co-op of the Year: Worker

This award is for worker co‑ops (owned and controlled by their workers) with a turnover of up to £1 million. The Loaf Bakery and Cookery School in South Birmingham have scooped the prize. Using ethically sourced produce, Loaf’s members actively bake extra loaves to donate to foodbanks, charities and community groups.

Small Co-op of the Year: Community

This award is for co-ops with a turnover of up to £1 million, that are owned by their community. The winner is Newcastle-based music venue, The Globe, run by Pink Lane Jazz Co-op. A former failing pub, it was saved when the community formed a co-operative and raised funds through community shares to buy it and create the UK’s first co-op-owned music venue and education centre. Throughout the pandemic, it has livestreamed events, which have been viewed by thousands and raised over £40,000 for musicians.

Small Co-op of the Year: Multi-stakeholder

Co-op News is the winner of the award for multi-stakeholder co-ops with a turnover of up to £1 million. In operation for 150 years, Co-op News reports on the activity of co-operatives throughout the world. Delivering news and features online and via a monthly magazine, it connects, champions and challenges co-operatives of all shapes and sizes in every sector of the global co-op community.

Co-op Council of the Year

The Co-operative Council of the Year Award has gone to Telford and Wrekin Council. The council works for and in partnership with its local community. Its vision is to ‘protect, care and invest’ to create a better borough. These values drove its response to the Covid-19 pandemic, which saw it support more than 22,000 households with vulnerable residents; recruit and engage more than 1,100 volunteers and work with more than 80 community groups. Watch a video about Telford & Wrekin Council

Cllr Sharon Taylor OBE, Chair of the Co-op Council’s Innovation Network, who sponsored this category said, “Huge congratulations to Telford & Wrekin Council on becoming the Co-operative Council of the Year 2021."

This award provides an opportunity to highlight the innovative ways that co-operative councils have supported their communities throughout the pandemic, putting the co-op values and principles into practice.
– Cllr Sharon Taylor OBE, Chair of the Co-op Council’s Innovation Network

Co-operator of the Year Awards

Alam Navsa has been Chair of Maynard Co-operative Housing Association for the last 25 years, championing community-led housing and steering the co-op’s success while bringing up three children and running a full-time business. Having grown up in a children’s home, Alam is driven by a passionate commitment to helping people enjoy a decent home and a better life. Watch a video about Alam.

Dorothy Francis is a trained mentor, qualified teacher and HR manager who merges these skills to support people in establishing and running co-operatives. She joined Leicester and County CDA (now CASE) in 1985 as a business adviser and has helped established over 200 businesses. Dorothy was the founder chair of Co-operative Diversity Action. She speaks at events throughout the UK and Europe on the benefits of encouraging people from Black, Asian and Minority Ethnic (BAME) communities to get involved in co-operatives. Watch a video of Dorothy.

Pete Westall has been a driving force for the co-op movement for many years, actively championing co-operative values and principles. As a result of this, he was appointed Chief Values Officer for The Midcounties Co-operative, the first role of its kind. Pete has been at Midcounties for more than 30 years, promoting and developing the society as well as wider co-operation. Watch a video of Pete.

Chris Herries received a posthumous award for recognition of more than 40 years involvement in the co-operative movement. This included being the first female Chair of Co-operatives UK and, at the time of her death in 2020, Chair of the Co-operative Party. Chris influenced and mentored many individuals at all levels, helping people in their personal development to become Co-op Directors and other prominent roles within the movement. Watch our video tribute to Chris.

Nigel Todd also received a posthumous award after passing away unexpectedly, at the age of 73, in March 2021. Nigel was a Labour/Co-op councillor for Newcastle’s Arthur’s Hill Ward. He also chaired the Co-operative College’s board of trustees and held a place on the board of the Co-operative Heritage Trust. He was a tireless campaigner and dedicated environmentalist who never lost faith in his vision of a better world. Watch our video tribute to Nigel.

Edmund Potter has demonstrated his commitment to co-op principles for more than 50 years. An inspiration to entrepreneurs and co-ops throughout the UK, he founded the company Delta-T in 1971, which he converted to a co-op in 1981. He plays a very active role in mentoring new members – and his enthusiasm and commitment to the co-op movement have inspired people throughout the co-operative community. Watch a video of Edmund.

Elaine Dean is a life-long co-operator who champions the co-op movement. She’s passionate about ensuring that the many co-operative organisations she represents are ethically sound and represent their membership. Elaine has been an elected member of the Central England Co-operative Society and its forerunners for 39 years – and was elected as President in May 2017. She is now Vice Preident. Watch a video of Elaine.

Want to know more about each winner?

About the Co-op of the Year Awards

Content by Co‑op of the Year
The co-op sector’s annual awards ceremony celebrating the achievements of co‑operators and co‑operative organisations across the UK.
Back to news