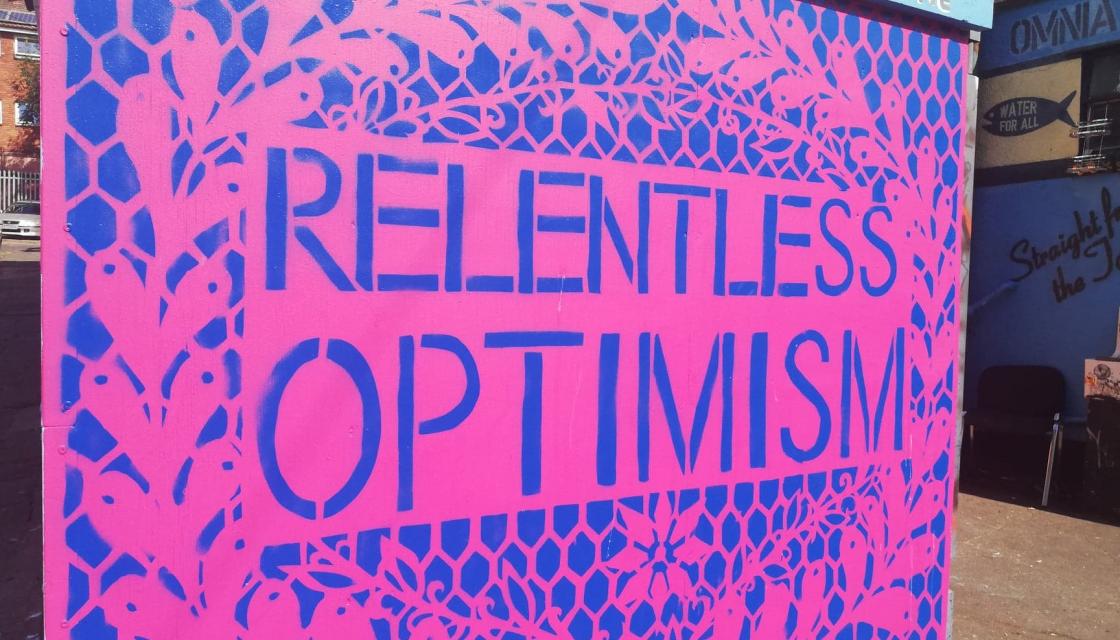 RELENTLESS OPTIMISM - one of Stokes Croft's many iconic catch phrases

On 15 July, we hosted a Community Shares Practitioner Meet-up in Bristol – here's what we learned.

This time was an opportunity to meet face-to-face, visit a diverse bunch of fascinating societies and according to Nathan Brown (Co-op Culture) “really remind ourselves why we stare at spreadsheets until our eyes bleed”.

For those who couldn't make it, this blog will share a snapshot of our day and the fascinating relevance and successes of Bristol in the community shares movement.

Hilary Sudbury, a well-established Community Shares Practitioner, based in Bristol and one of the Directors of Stokes Croft Land Trust, welcomed us all to the People’s Republic of Stokes Croft to kick off the day.

Jim Brown, Strategic Advisor to the Community Shares Unit since it was established in 2012 and Bristol local, started things off with a trip down memory lane. As with the way of the world, our story of community shares exists at the level of high politics and individual inclinations.

From 2008-2009, a couple key publications on the potential for society share capital were published:

An early political supporter of the movement, Hazel Blears, then Labour Secretary of State for the Department for Communities and Local Government (DCLG) apparently initially thought this was all ‘some middle class tosh’ until she visited FC United in Manchester, which had raised £1.5 million in community shares and felt that strength of spirit through the community’s ownership in the club.

In 2010, the General Election returned a Conservative government and Hazel Blears was replaced by Eric Pickles in DCLG. Eric Pickles also had riots under his remit and at the time, the ‘Tesco Riots’ were kicking off in Stokes Croft in Bristol. A civil servant in the Department accepted an invite from Jim to come visit the area and meet local social entrepreneur Chris Chalkley from the People’s Republic for Stokes Croft. The case was made that a community share offer and retaining assets for the benefit of local communities was part of the future of Stokes Croft, an area facing high deprivation, derelict public spaces and riots, while simultaneously through its creative and ‘edgy population’, attracting gentrification, land banking by distant landlords and rising rents and house prices. 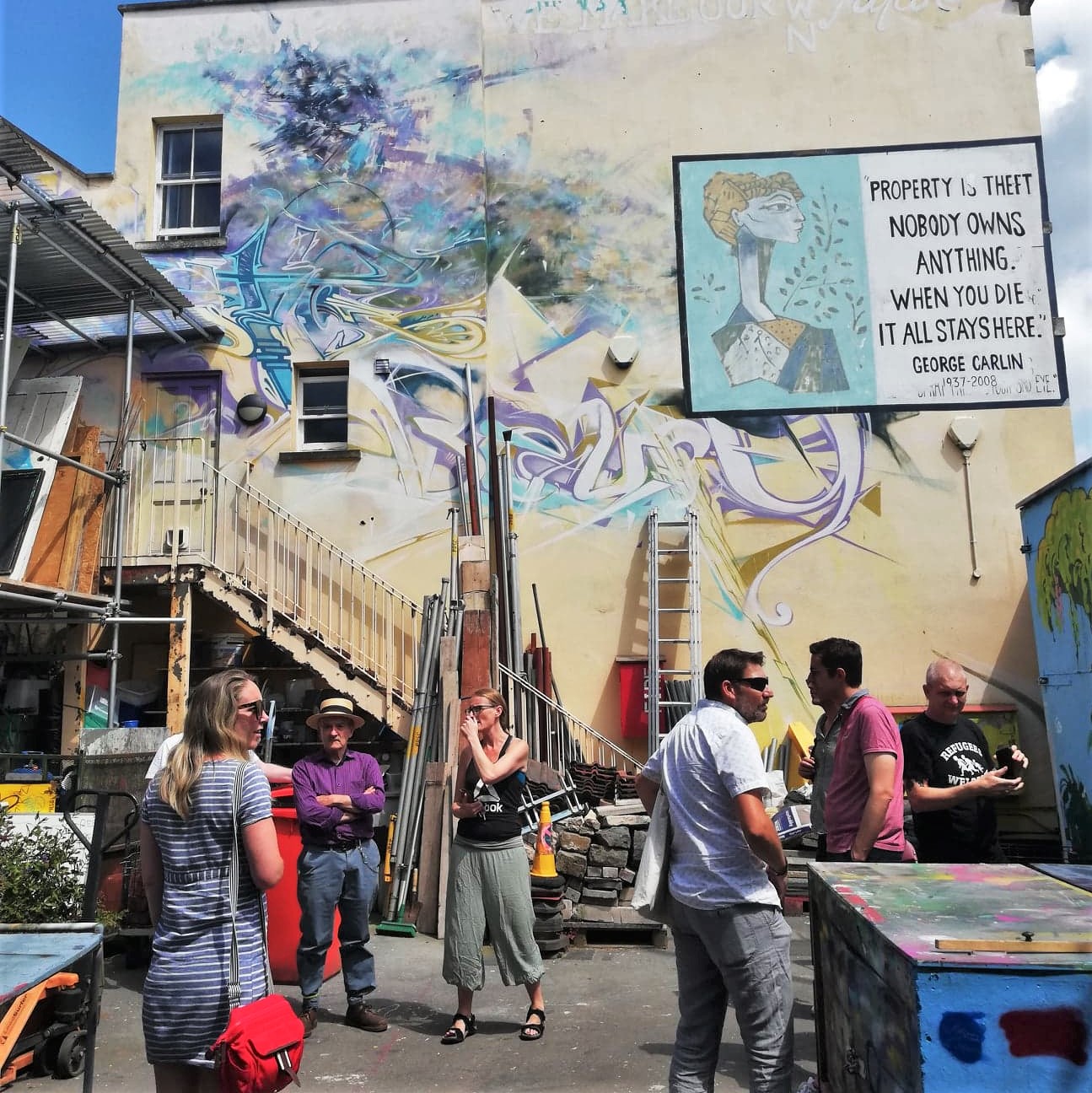 In the courtyard at the People's Republic of Stokes Croft, with community access to scaffolding for murals

Also at this point, Chris Chalkley and a few other ‘local heroes’ put their own money in to save the building for the People’s Republic of Stokes Croft with the long term intention of the community buying it back from them at the right time, and at the price they had paid for it at the time of purchase. An intention they have upheld.

12 years later, Stokes Croft Land Trust (SCLT) have finally run a successful community share offer this year and are in the process of securing the ownership of the current People’s Republic of Stokes Croft building, which houses artists, the radical Stokes Croft China, an accessible and inclusive events venue and multiple small, political and creative organisations.

Keith Cowling, a Director of SCLT gave us the story of how they got to where they are now and how important the mechanism of community shares was "to give local people a voice, and actively fight back against gentrification”. “The goal is to manage a portfolio of assets and businesses around the Croft and not just focus on housing like some other Community Land Trusts".

SCLT also received £75,000 in match equity investment from our Community Shares Booster Fund, funded by the Architectural Heritage Fund and Power to Change. 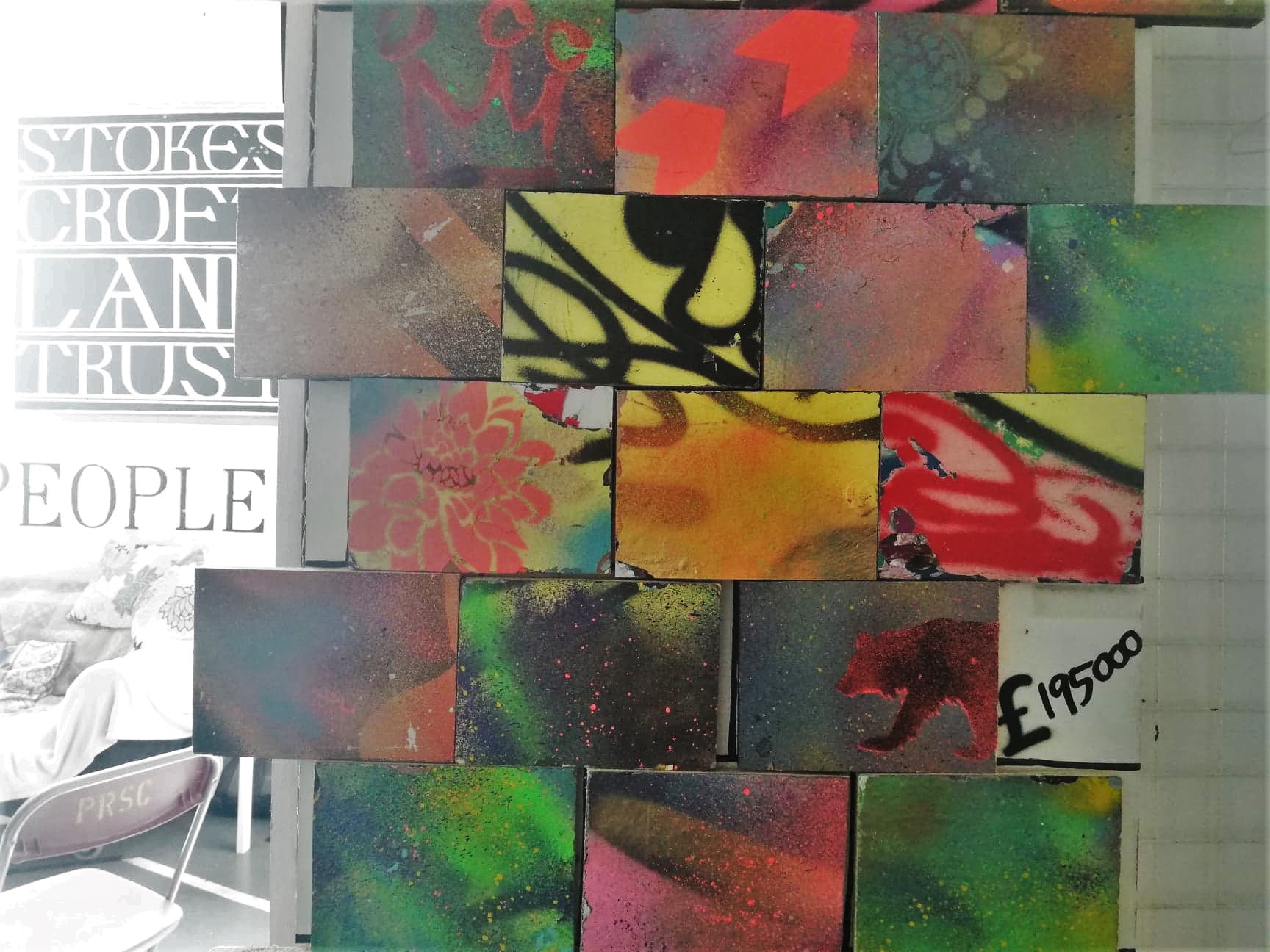 We then heard from Jess Gitsham from Bristol Energy Co-op who have raised around £13 million in community shares since their first offer for £127,000 in 2012 which installed solar panels on Hamilton House in Stokes Croft. They now have installed panels across 13 community buildings and invested in two solar farms in Bristol. This has saved these community organisations significantly on their energy bills and carbon footprint. Surpluses have also facilitated over £300,000 in community benefit contributions to organisations in the South West to tackle the climate crisis.

They offer 3% interest on their shares and for the scale of their recent offers (£2 million and £1.3 million respectively), Jess reckoned they spent about 5% of the total raise on attracting the investment. This includes Facebook advertising, running events, webinars etc. to market and promote the offer. 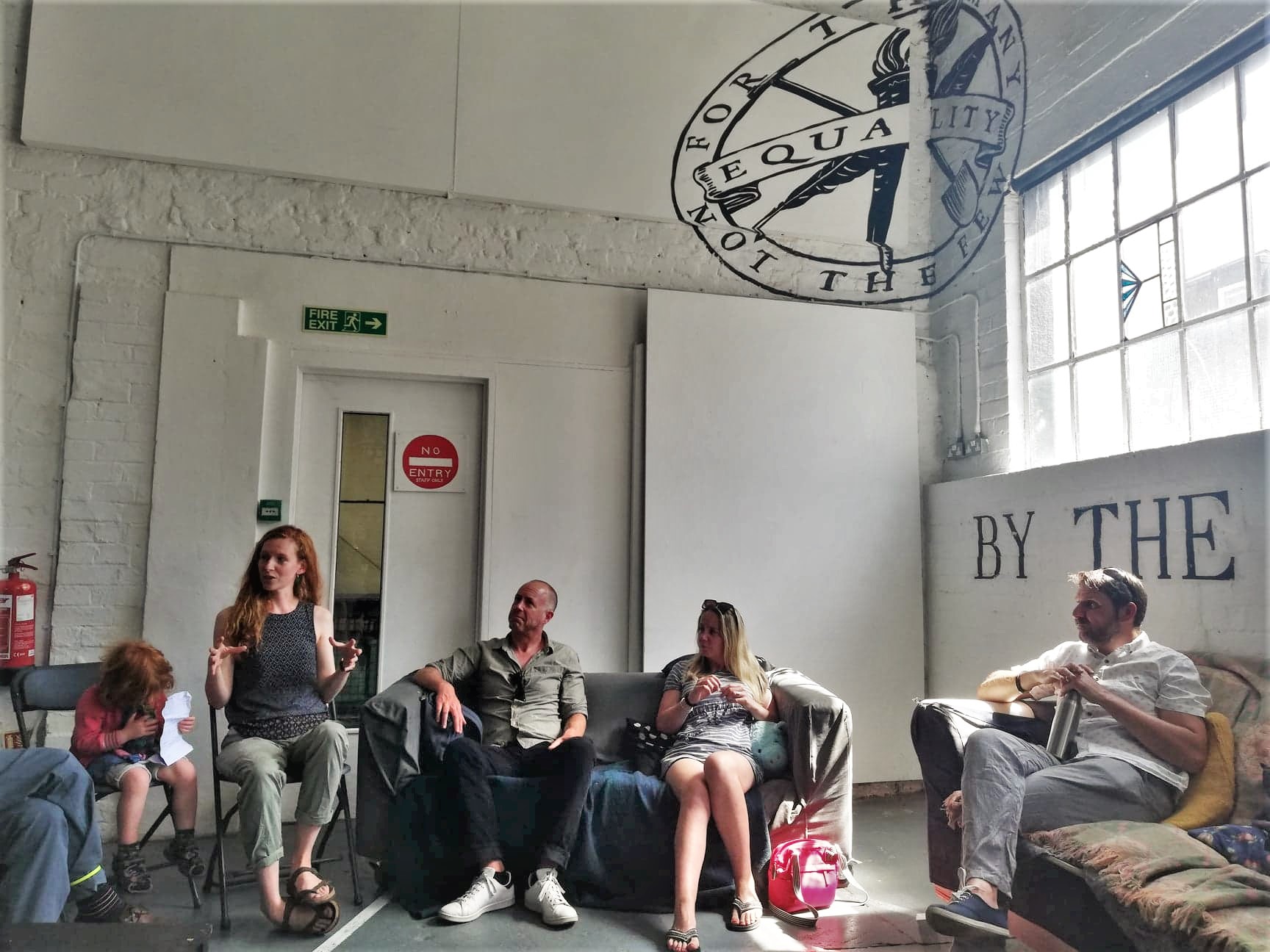 After a short walk over to Old Market, we were greeted by the Matt Oldridge at The Exchange, a community owned, run, independent grassroots music venue in Bristol. Over an excellent vegan hotdog from the bar, we heard The Exchange’s story to secure their long term future through community ownership. In October 2018, they hit their community share offer's maximum target of £300,000 from over 400 investor members. Since then, they have invested in the space, significantly improving accessibility of the venue and gaining the Attitude is Everything Gold Award. They have now improved the smaller venue and recording studio downstairs and the beautiful upstairs record shop. They have also weathered the storm of lockdowns on the live music industry.

Matt has said the democratic ownership of the venue by the community who care about its long term future, matched with the access to patient capital to invest significantly in the space has been transformational. Matt is now a trustee of the Music Venue Trust who have recently launched their ambitious ‘Own our Venues’ community share offer to secure the future of at risk grassroots music venues across the UK. 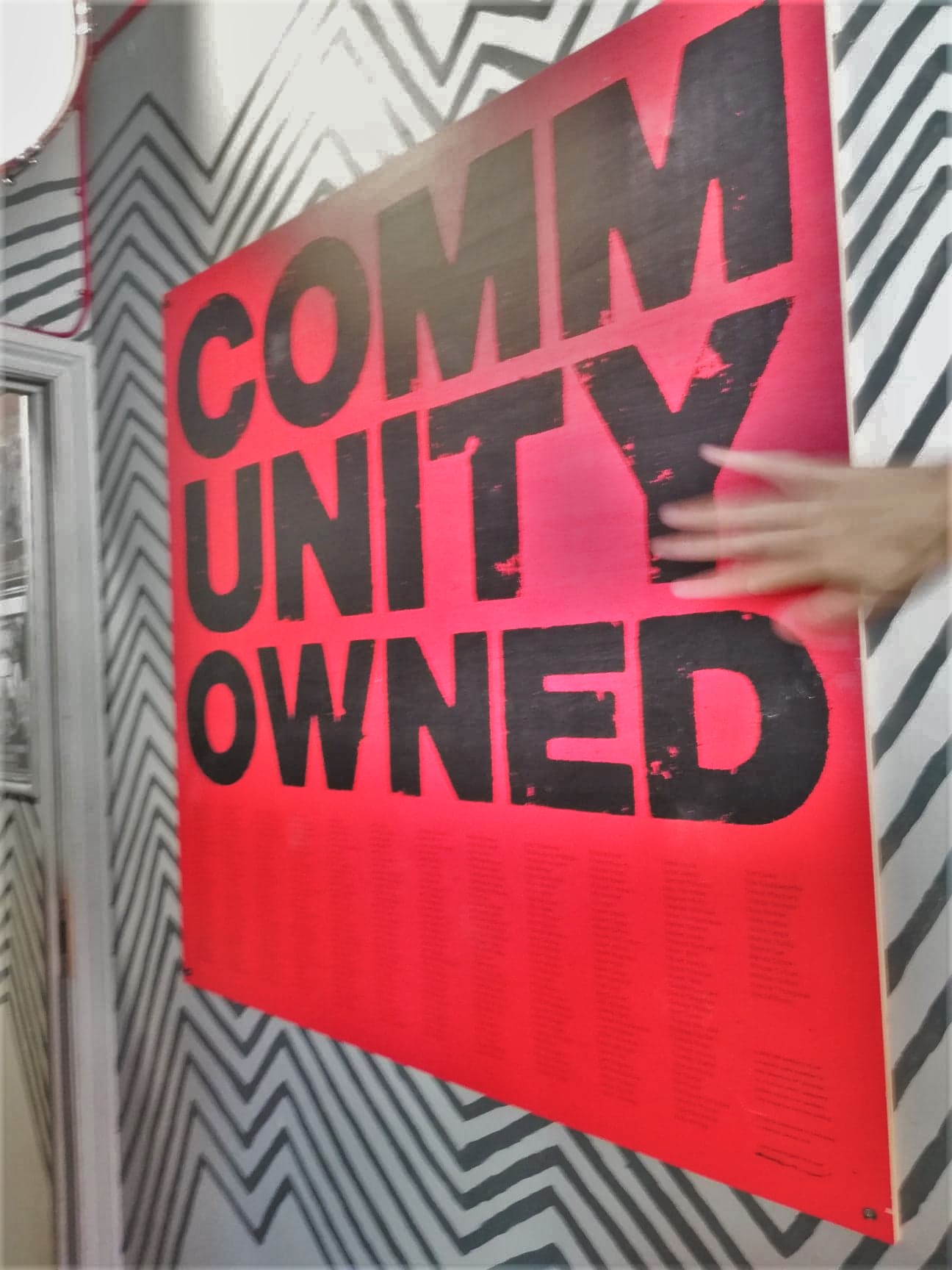 We wrapped up the day with a tour round Bristol harbour one of the iconic blue and yellow Bristol Ferries, Matilda. The Bristol Ferry Boats and similarly iconic cranes on the harbour were at risk of being sold off or disposed of by Bristol City Council. A philanthropic group known as ‘The Rescuers’ stepped in to purchase them off the Council with the plan for the community to buy them back off them using a community share offer.

In 2013, Bristol Community Ferry Boats was established and raised £250,000 from over 850 local investors to secure the future of the ferries as a viable business and source of pride for the Bristol community. They now operate a successful ferry service in the city, used by commuters, tourists and available for private hire and floating parties all year round. 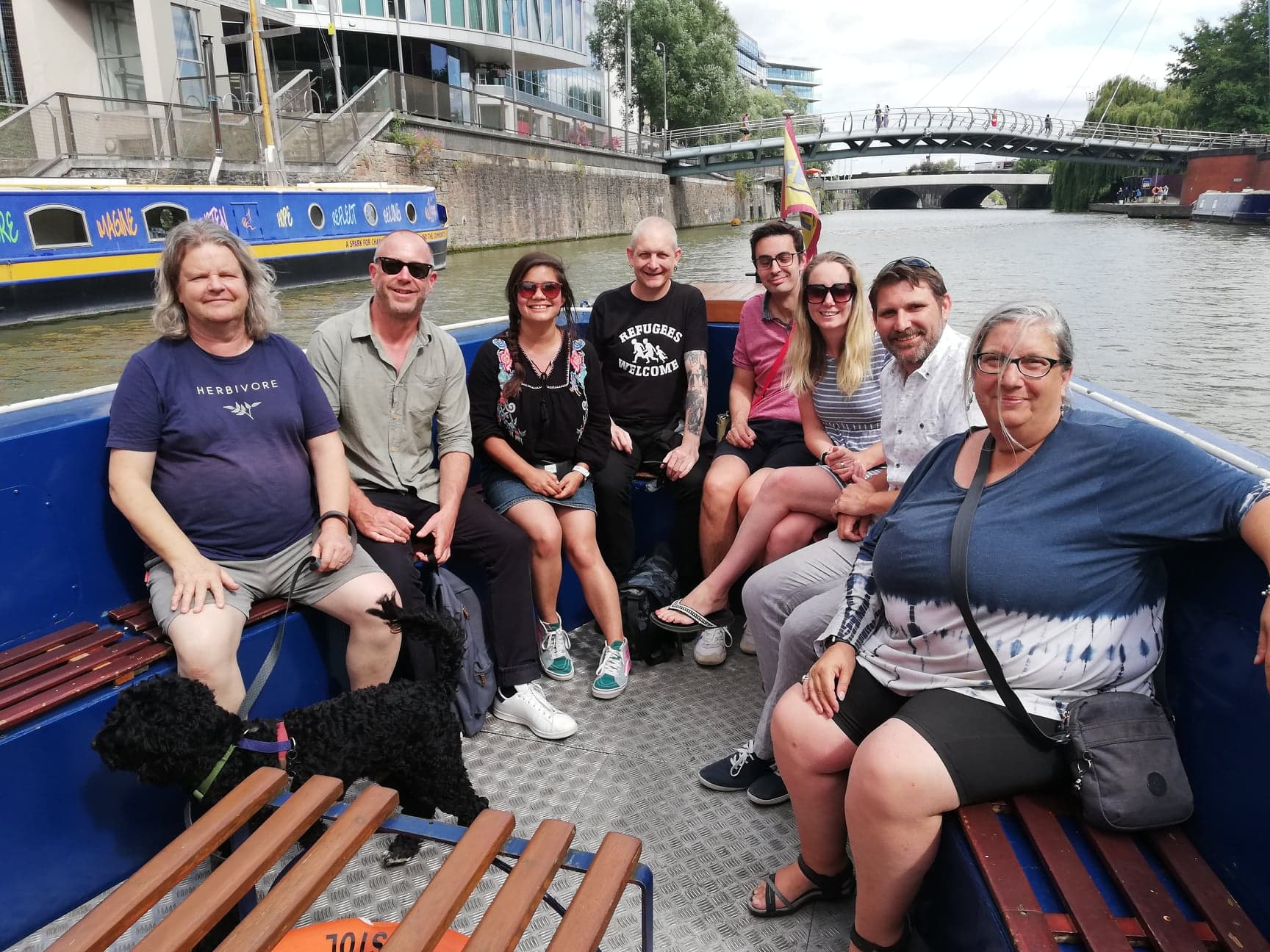 Want to find out more about community shares?

Find out more about our support for community share offers, becoming a Community Shares Practitioner and the Booster Fund
Find out more
Related content
Image

Content by Booster Fund
The Community Shares Booster Fund is a funding scheme to support community share offers.
Back to blog