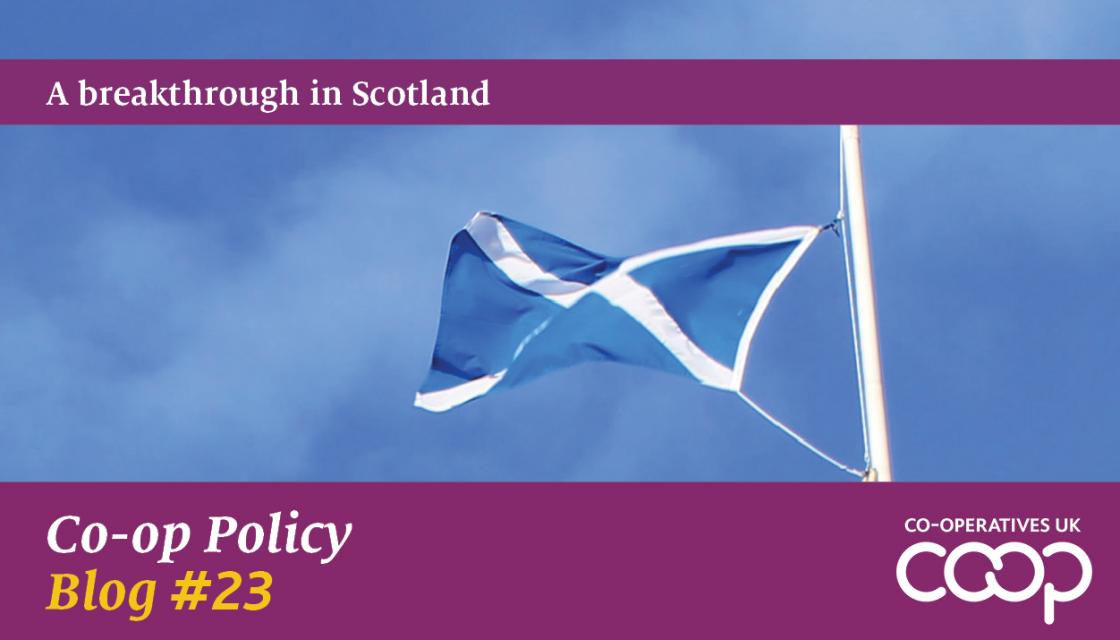 Scottish government is now committed to supporting co-ops in its policy programme. This provides a massive opportunity to unlock the huge potential for co-ops in Scotland and follows a successful effort by Co-operatives UK to build cross-party support for our movement.

We are celebrating a landmark move in Scotland with co-ops set to enjoy focused government support. And it gets even better for housing co-ops following the new power-sharing agreement between the Scottish National Party (SNP) and Scottish Greens.

With some discreet input from Co-operatives UK during confidential negotiations, the parties agreed to two explicit references to supporting co-ops in their Shared Policy Programme. There is now agreement that Scottish government will:

The text on increasing the scale of the Scottish co-op economy may not be quite as clear and committal as we had hoped, but to have explicit reference to co-ops in the new policy programme for Scottish government is a significant improvement. It’s also an incredible opportunity to unlock the massive potential of co-ops in Scotland.

We know there's a real economic case for co-ops; that businesses that share power and wealth are the future. It's significant that this is now reflected in government policy.

In the run up to the Scottish election Co-operatives UK made a concerted effort to win support for co-ops from across the political spectrum. In this we were successful, with specific manifesto commitments from the Conservatives, Labour, Liberal Democrats and Scottish Greens.

The Cross Party Group on Co-operatives in the last Parliament was a critical platform for this. All the MSPs who contributed to the group share in this win, not least the Convenor, former MSP James Kelly, who put in so many extra hours on behalf of co-ops. The Scottish Co-operative Party also provided critical support to the group.

Scottish Greens have been champions of co-ops for many years. The Greens' co-leader Lorna Slater gave me assurances that she and her party would champion co-ops in this Parliament - and she was certainly true to her word when it came to negotiating with the SNP.

That the SNP-Green agreement has resulted in stronger policy support for co-ops, demonstrates the importance of Co-operatives UK's political independence and cross-party approach to lobbying.

Get all the latest co-op policy developments, campaigns, news and blogs straight into your inbox.
Sign me up

We already knew we have a good opportunity to secure support for housing co-ops in Scottish government’s coming Rental Strategy, after getting recognition for them in the Housing to 2040 review. The new Shared Policy Programme adds further weight to this. It's important to keep up the momentum and we'll be convening a roundtable of Scottish stakeholders next month (September 2021) to explore this.

In other Scottish policy news our CEO, Rose Marley, is giving evidence to the Economy and Fair Work Committee in the Scottish Parliament on Wednesday (2 September 2021) morning.

We were already engaging Scottish government on various aspects of its policy agenda and now expect to proceed with a greater priority.

Revive and thrive: Why co‑ops are pivotal to a fairer, stronger Scotland

This report highlights the success of co‑ops in helping Scots weather the Covid‑19 storm and makes six recommendations for Scottish government to act on, now and after the next election
Resource
Image

Following concerted lobbying by Co-operatives UK and the Cross Party Group on Co-ops, Scottish Government has included housing co-operatives in its ‘Housing to 2040 strategy.
Policy page

Co-op manifesto asks are vital to rebuilding the Scottish economy

A four-point plan to harness the spirit of co-operative working seen during the pandemic is crucial to rebuilding Scotland’s economy after Covid-19.
Policy page
Back to blog