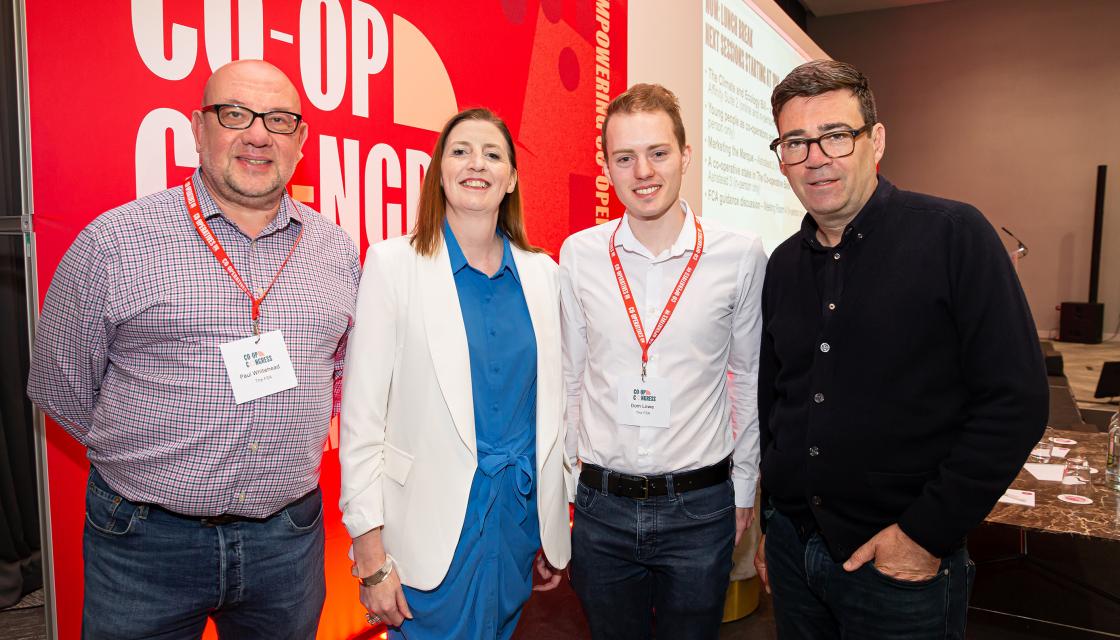 Greater Manchester Mayor, Andy Burnham, is spearheading a taskforce to give fans an active role in the future ownership of Oldham Athletic Football Club.

Plans are hinged around a community share offer, allowing supporter groups and individuals to buy a stake in OAFC.

Andy Burnham, who announced the taskforce at Co-op Congress, said: “Sadly, as we have seen all too recently in Greater Manchester at Bury, new owners armed with little more than empty promises can come into clubs at the point of crisis and make matters worse.

“Football clubs lie at the heart of our communities and require a community response that provides a long-term solution. Fans and local communities can’t be left high and dry again. We are determined not to let this happen with Oldham.’

The taskforce is made up of the Football Supporters’ Association and Co-operatives UK, supported by The Co-operative Bank through the Hive programme. Its broader aims are to ensure supporter-led solutions are in place before crisis point is reached.

Football clubs lie at the heart of our communities and require a community response that provides a long-term solution. Fans and local communities can’t be left high and dry again. We are determined not to let this happen with Oldham.
– Andy Burnham, Mayor of Greater Manchester

Poor management by previous owners resulted in Bury Football Club collapsing into administration and being thrown out of the Football League. The project to revive Bury FC places supporters and the local community at its heart. GMCA staff and the Football Supporters’ Association (FSA) are supporting the local authority, supporter groups, and private investors to bring professional football back to the town.

The ground has been bought from the administrators and a five-year business plan is being developed. It is a collaborative community response which provides valuable lessons for the whole of football.

Andy Burnham said: “Latics are at the heart of the Oldham community. To protect its future the club should, ideally, be in the hands of the community, not private individuals. Supporter groups are discussing plans for a community share offer that will enable the fans and the wider Oldham community to come together and secure that future. If successful, the club’s future should be secured for the next 100 years and beyond.

“I have got huge respect for Andy Walsh and the FSA, who are continuing the work of an organisation I founded over 20 years ago called Supporters Direct. It’s my belief they could potentially achieve so much more - and expand supporter ownership of our clubs - if they were working with the backing of mayoral combined authorities. That is what I want this taskforce to explore, starting with Oldham Athletic.”

Paul Whitehead, from Oldham Athletic Supporters’ Foundation, said: “After a long period of upheaval for the club, we are committed to finding solutions that can unite the fanbase and command the support of all those who care about Oldham Athletic. We are putting in the work now to establish a structure for the longer-term stability of the club.”

Andy Walsh, from the FSA, said: “The FSA has more than 20 years of experience of helping supporters and football clubs. The FSA continues the work of our predecessor organisation Supporters Direct in developing model constitutions for community benefit societies and governance frameworks for football clubs. This work gives supporters a voice but began before devolved powers existed. This task force has the opportunity to really innovate and find new ways to help clubs and supporters embed community wealth through football’s engagement with local economic and social impact initiatives.”

Rose Marley, CEO of Co-operatives UK, said: “A co-operative is when a group of people come together to serve their members’ needs. In this case we’re talking about the fans as members. Famously started by Oldham’s sister town Rochdale, co-operatives are becoming the go-to business model for communities and business that want to take control and ownership of their assets.

“We’re seeing it more and more across community energy companies, data ownership and control and of course.  Everyone is familiar with The Co-op shops, owned by their customers, but this opportunity with Oldham will create a blueprint for other clubs and sporting assets to ensure they have a stake and a say in their club’s day-to-day operations as well as all future decisions.”

Catherine Douglas, Managing Director of Business Banking at The Co-operative Bank, said: “As a Bank built on co-operative values we believe that when people work together, good things can happen. This is a fantastic example of how co-operation can give football fans a real say in how their club is managed.”

Content by Co-op Congress
Watch all the action from the main room at The Co-operative Bank-sponsored Co-op Congress 2022.
Back to news