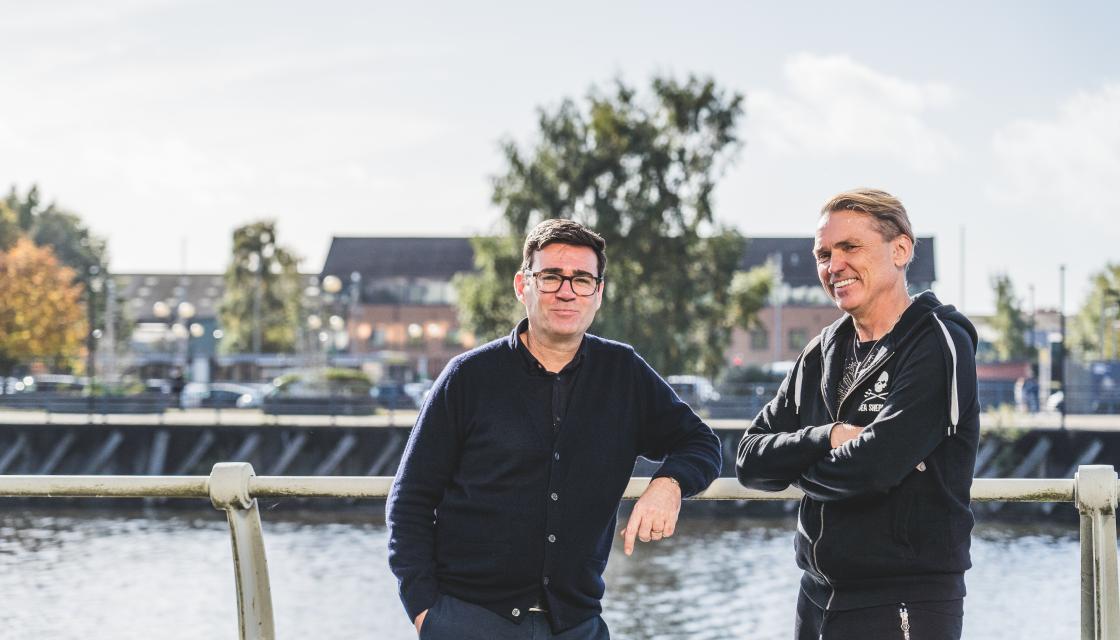 Taskforce launched to scope out green energy potential in Manchester and Liverpool city regions and examine potential for co-operative ownership of renewables.

Metro mayors Andy Burnham and Steve Rotheram have launched a taskforce to explore whether sufficient green energy through wind, hydro, solar - and even grass - could be harvested to power the equivalent of both city regions.

The Green Energy Task Force, launched today (17 October) at the Greater Manchester Green Summit, is a collaboration between the Greater Manchester and Liverpool City Regions, green entrepreneur Dale Vince, Co-operatives UK and supported by Climate Outreach. The taskforce will map the green energy potential of both city regions and look at how people in the north west can directly own and control those resources.

Dale Vince, is founder of pioneering green energy supplier Ecotricity. He said: “We can power the whole of Britain by harnessing our wind, sun, waves and even grass. And we know it makes most sense for the people to own these resources, so that the benefits accrue to us as a country.

“The Green Energy Task Force is a first step towards that and doing so at a regional level - starting with the Greater Manchester and Liverpool regions. It will create a blue-print that can be replicated across the country, by all regions - in pursuit of a net zero carbon in the 2030s.”

Greater Manchester Mayor, Andy Burnham, said: "We want to seize the problem in the north-west head on. Energy bills have skyrocketed. People feel powerless. When we look at our wind and our other renewables, ownership of our energy is up for grabs.

“Why not us, the people and businesses of the north-west - the stakeholders - make a play for this? Let the people be in control. So I'm delighted that Dale and the taskforce have agreed to take on this challenge and I'm really excited about what we’ll come up with."

Steve Rotheram, Metro Mayor of the Liverpool City Region, said: "I want our area to lead the decarbonisation race to, a mission that has never been more important given skyrocketing energy bills and the ongoing debate around energy security. The Liverpool City Region has the potential to be the UK’s renewable energy coast, capitalising on our strengths in wind, solar, hydrogen and tidal power.

The taskforce will explore ownership models for new and existing green energy. A focus will be on co-operative and community ownership, with stakeholders to potentially include local authorities, public bodies, private business and taxpayers.

Co-operatives UK is the trade body for co-operative businesses and the expert on member-owned business. Rose Marley, Co-operatives UK’s CEO, said: "We can’t achieve net zero in the UK without mobilising communities and unlocking community-led action on climate. And local government is uniquely placed to invest; to unlock sites; to be a bridge to communities. “Bringing together combined authorities, private businesses and most importantly, local people, is a powerful mix. It’s a multi-stakeholder co-operative and they already exist. Look at Plymouth Council and Plymouth Energy Community. We need more and the Green Energy Task Force is a really positive step towards that ambition.”

Dr Amiera Sawas, of climate change communications experts Climate Outreach, said: "We see a desire to want to do something, but nobody knows what or how. This could be a really empowering and practical way to engage the population in creating a solution to a problem affecting their everyday lives.”

For Community Champion Nasri Ismael, promoting solar power and helping local people and organisations save money on their fuel bills is rewarding work that’s combating the climate crisis.
Case study
Back to news