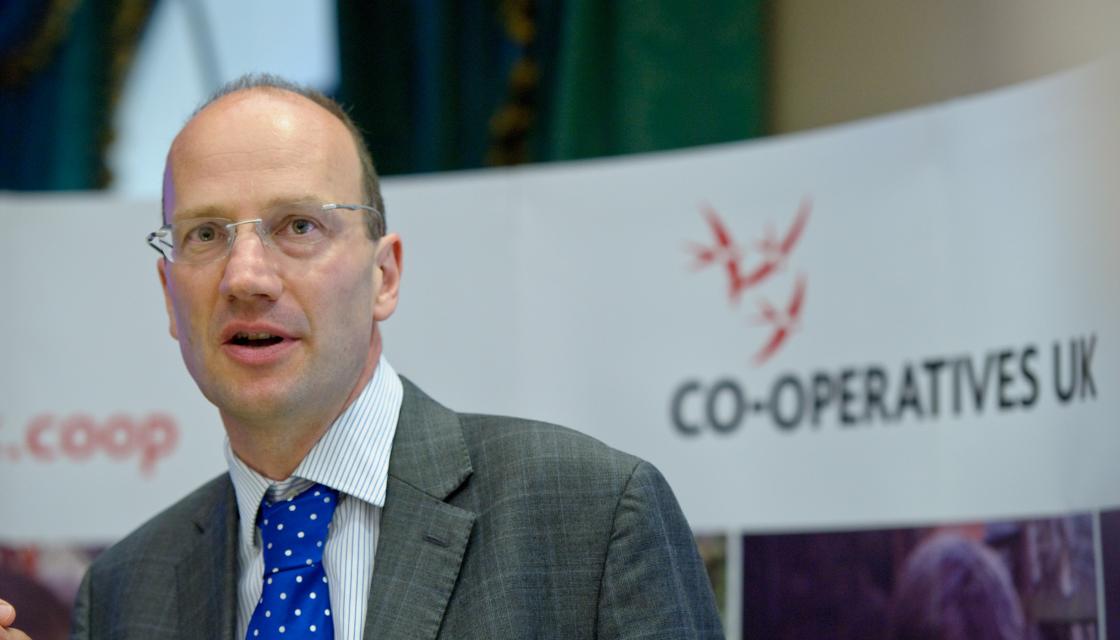 After more than a decade at the helm of Co-operatives UK, we say farewell to our Secretary General, Ed Mayo who leaves us to take up an exciting new role at London-based charity Pilotlight.

Tributes from across the globe

Leaders throughout the co-operative movement paid tribute to Ed in a moving video, featuring good luck messages from co-operators from Australia, the USA, Germany and across the UK. Watch it here:

Steve Murrells, CEO of one of the UK’s largest co-ops, The Co-op sent a personal message, along with the CEO of Lottery funder Power to Change, the Employee Ownership Association, Plunkett Foundation, co-op College, Co-op News and Central England Co-operative.

Nick Matthews, Chair of the Board of Co-operatives UK said:

“Thank you for the work for the work we’ve done together in the last 11 years. Like any great manager, you’ve built a team able to carry that work forward. So now we are stronger, more versatile and more able to carry forward that thinking [about co-operation].”

“I’ve had a chance to watch you really champion co-ops across the United Kingdom – and further afield across the world. You have done a remarkable job putting co-ops into the psyche of good business. You've led from the front, you’ve engaged all the way and I think your legacy says everything about the difference that you’ve made.”

Leaders from partner organisations added their tributes to Ed, including Vidhya Alakeson, Chief Executive, Power to Change, who said:

“Thanks for five great years of partnership. We’ll miss your wisdom and generosity of spirit.”

Your passion for co-operation is second to none. Your insight into the co-operative landscape and the sector – and the wider economy as well – and your thoughtfulness with which you’ve applied that insight has been profound, and certainly left a huge legacy on the sector.
– Deb Oxley, Chief Executive, Employee Ownership Association

“I’m going to miss how you manage to cut through all the noise in meetings and come up with brilliant summations at the end of very long conversations. Thank you also for your long continued support of Plunkett Foundation and, for me personally, you’ve been an inspiration to me and a great mentor.”

“Thank you so much for all of your support and goodwill whilst I’ve been the College, in a variety of roles, and for the enormous knowledge exchange that has gone on, from you to me, as I’ve learned a great deal about the co-op movement.”

“Thank you for your support and passion for the co-op movement over the years.” Whilst Elaine Dean, President of Central England Co-op added:

“Thank you very much for all the years of help and friendship and advice as Secretary General of Co-operatives UK.”

What a phenomenal amount you’ve achieved at Co-operatives UK over the past decade. You’ve made a massive, massive impact on the UK co-op movement – and I have no doubt you'll do the same in the charitable sector too.
– Rebecca Harvey, Executive Editor, Co-op News

Messages of good will flooded in from across the world, with Ed’s counterparts in Australia and the United States adding their thank yous:

“On behalf of co-operators in the United States, thank you for everything that you’ve done for our movement. Your passion, your expertise, your integrity, has given us so much.”

“Thank you for your inspiring work for the co-operative movement. I hope to see you again very soon.”

“Thank you for your powerful commitment to the co-operative sector.”

Ed takes up his new role at Pilotlight in June and Co-operatives UK will be beginning its search for a new Chief Executive in the coming weeks.

Goodbye Ed, and thank you for everything, from all your friends and colleagues at Co-operatives UK.