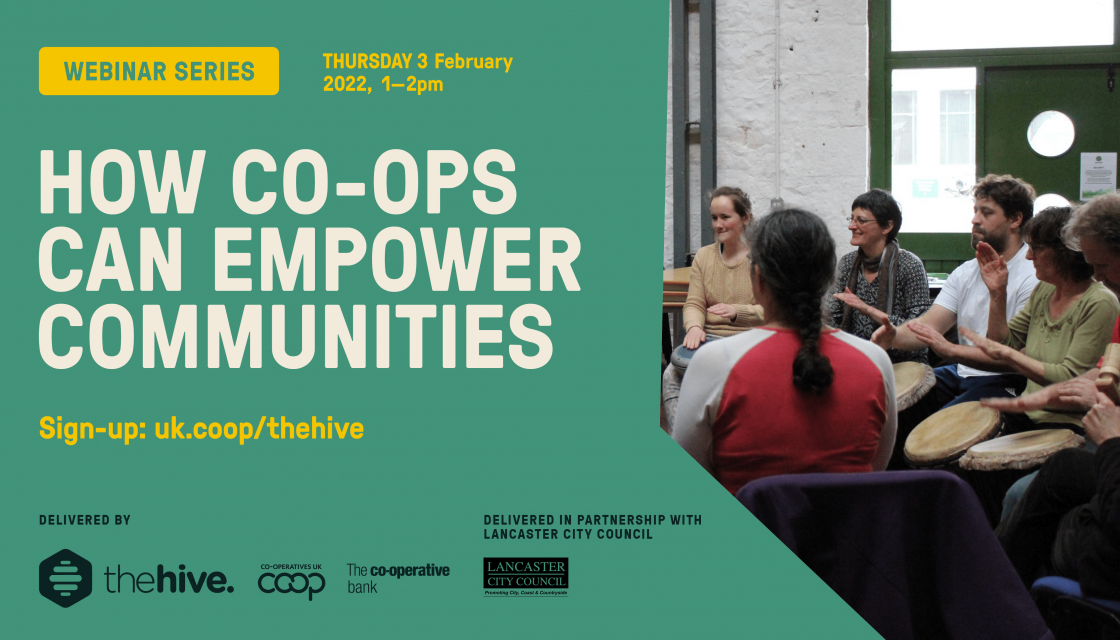 An opportunity for groups across the Lancaster district and beyond to discover the power of co-ops to strengthen communities.

This webinar is also being delivered in partnership with Lancaster City Council.

The last decade has seen an increase in the number of community owned co‑ops across the UK. Co‑ops are democratic businesses that allow local communities to take control of the services and spaces that matter most to them. They enable people to pool resources to trade goods and services that benefit the community.

The cluster of co-ops at Halton Mill are examples of groups coming together in Lancaster to meet local needs. We’ll hear from a speaker from one of these co‑ops who’ll explain their role in empowering and supporting communities.

The webinar will also signpost to the help and support available from Lancaster City Council and The Hive business support programme.

Anyone in the Lancaster district and beyond who’s keen to learn more about co‑operatives, this includes:

Daniel Clarke is responsible for developing and driving initiatives that support Lancaster City Council’s community wealth building programme. Community wealth building is an approach to local economic development that redirects wealth back into the local economy, and places control and benefits in the hands of local people. It promotes various models of enterprise ownership, including co‑operatives, which can deliver long term social and economic benefits.

Petra Morris works in the Development Team at Co‑operatives UK and leads on the delivery of The Hive business support programme which has supported thousands of co-ops. She’s busy co‑operating elsewhere too, as a voluntary Director (Secretary) of Friends of Stretford Public Hall, a historic multi-purpose building owned by its 800 investor members. Petra has previously run her own business and spent many years in local government promoting tourism, economic development and supporting local communities.

Chris Coates is the site manager at Halon Mill for the Green Elephant Co‑operative who manage a co‑operative office and workspace just outside Lancaster. The co‑op is part of a cluster of co‑ops including a food co‑op and a car club. Chris has many years’ experience in the co‑op sector, being involved in both housing co-ops and worker co‑ops during the ‘new wave’ of co‑operatives that formed in the 1980s.

Content by The Hive
This section takes you through the start-up process for setting up a co-op. Keep track of where you're up to, and look out for sign-posts if you need more support along the way.  Finally make sure…
Step by step
Image

Content by The Hive
Organised by Co-operatives UK
Discover co-ops – their purpose and benefits. And find out if your business idea suits the co-op model…
Tuesday 07 December 2021
Event
Image

Freelancers unite! The power of co-ops and joint working

Content by The Hive
Organised by Co-operatives UK
Discover co-ops – their purpose and benefits. And find out if your business idea suits the co-op model…
Wednesday 19 January 2022
Event
Image

Content by The Hive
An opportunity for people in Scotland to discover how platform co‑ops can put power and profits in the hands of service providers, rather than tech giants.
Tuesday 25 January 2022
Event
Image

Content by The Hive
Organised by Co-operatives UK
Discover co-ops – their purpose and benefits. And find out if your business idea suits the co-op model…
Wednesday 09 February 2022
Event
Image

Content by The Hive
Join our series of FREE webinars for people interested in starting a co‑op business.
Back to events