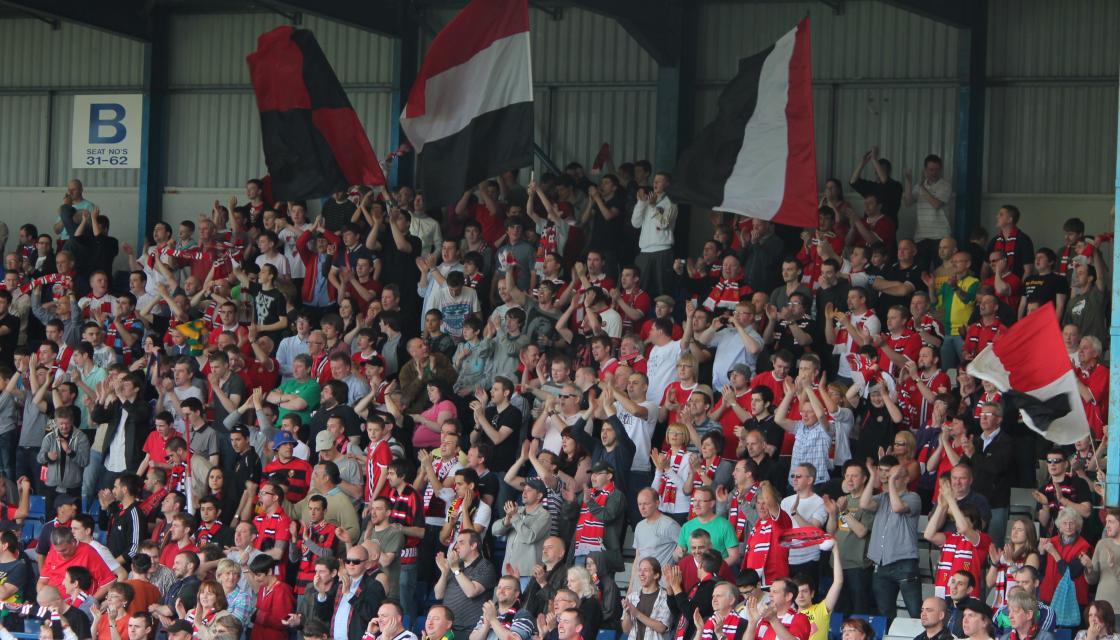 FC United of Manchester is a co-operatively owned football club, launched in 2005 by the fans in order to provide affordable football for all.

Not only is FC a great club but it’s mine. Along with thousands of fellow fans, I’m a part owner of my team.
– John Connolly, fan and owner, FC United

Since it was set up, growth has been one of its priorities. Achieving the club's goals – keeping football community-based and being fan-led, rather than driven by profit – requires a great deal of both financial and human capital and so the club introduced a community shares scheme.

In the past club growth had been restricted as FC United had never had its own ground and so they used to play their home league matches at Gigg Lane in Bury. Paying rent for this arrangement was draining for the club’s revenues so they decided that having their own facility would allow guaranteed financial sustainability. Also it would also give them the opportunity to fulfil their ambitions for their members and community.

Back in 2006, it was recognised that having their own ground was key to their growth strategy as a member owned club. Uniquely for English football,  the stadium build would be part-funded by an issue of community shares in the club.

The business case was straightforward from the beginning. The savings from not having to rent a stadium, offices and training ground, plus the additional match day income from catering and bar sales, and the scope to generate additional income from other uses of the stadium, would cover the cost of capital for a new stadium.

Additionally, the community owned facilities would be able to provide services for members, as well as the community work carried out by the Club. The stadium showcases a new model of facility development, based on football supporter ownership and community involvement.

In May 2015, this goal was realised when Broadhurst Park in Moston opened to national acclaim. However, the journey was not without its challenges – from locating the site, receiving planning permission and raising the necessary finance, of which the community share offer was instrumental.

Now we stand here and it’s all done and it’s all ours. You can relate to it, it’s a Club with a capital ‘c’. It’s the original meaning... It’s amazing to have a home; 10 years on the road, now we’ve got somewhere to lay down our roots. It will just be great to see where we go now, now we’re here... This club is about the supporters. You are a part of it; it’s a part of you.
– Steven Chadwick, FC United volunteer, football club owner

How did they raise the investment?

In 2006, FC United launched the Development Fund, a campaign to raise £500,000 in donations. But the club soon realised that it needed to raise its target to at least £3m, and this was more than could be raised through donations alone. By 2009, FC United had over 2,000 members and it made sense to ask them to become investors as well as donors through issuing community shares.

At this time the original target was £750,000. However they were so successful that the target amount was revised twice, up to its current figure of £2m. This amount has been raised from 1,522 people with most investing £500 or less.

The club’s success with the community share scheme has enabled a further £3m of other grant funding to be unlocked which has been used to meet the £6.3m cost of their new ground and community facility.

This is a unique development in English football and has been recognised as offering a real alternative to the way football is run and financed.

“Finding out how to create and run a football club was something none of us had any experience of. We’re fortunate in having quite a wide fan base with people with many varied life skills, so we just shout up when something needs doing. We’re pieces of a jigsaw that don’t fit into anyone else’s puzzle. Supporters, ordinary people like myself, we’ve somehow managed to scrape together about £3.5 million between us. The goal was to achieve a home of our own and we kept working at it, we kept plugging away, and here we are now. For me the important thing about this club is that we exist. It’s testament to what people power can still achieve and that’s what FC United is. We’re a community, we’re a family.”

£200 million has been raised through community shares by more than 126,000 people since 2012. We work to grow the community shares market through our leadership in best practice standards and…
Image

Content by Community Shares
Less than 10 years ago, community shares were almost unheard of. Yet since 2012, £155 million has been raised by 104,203 people supporting more than 440 vital businesses – an impressive 92% of which…
Back to case studies