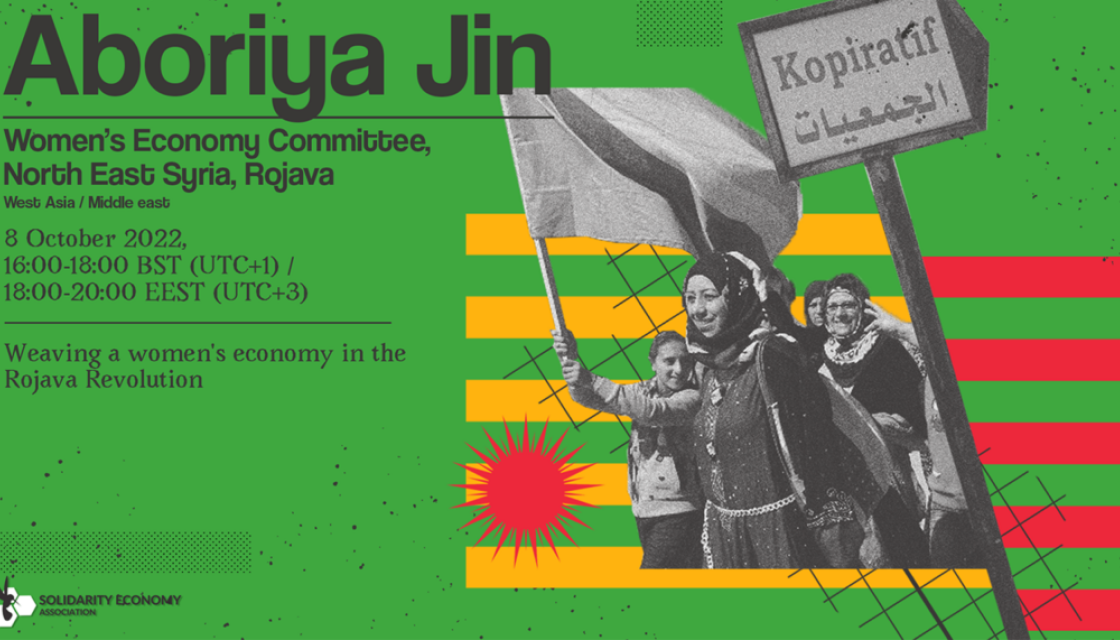 Building a solidarity economy: Weaving a women's economy in the Rojava Revolution.

This webinar is the second of a series of conversations with radical grass-roots solidarity economy organisations across the world who are breaking new ground in their own contexts while building power in their communities.

Solidarity Economy Strategies for a New and Better World

Hosted by SEA and the Translation Commune, each webinar will include multilingual translation and interpretation, to share and internationalise local knowledge, experience and strategy.

These events take place on the second Saturday of each month via Zoom, with live simultaneous interpretation in Arabic, English, French, Kurdish (Kurmancî), Punjabi, Spanish and Turkish.

The zoom link for the meeting will be shared before the event.

Aborîya Jin - 'Women’s Economy' - are a democratic autonomous economic body that's part of the women’s movement in North and East Syria. They are part of Kongra Star, a vast umbrella of the many organs of the women's movement, from women's committees at the commune (neighbourhood assembly) level, up through the autonomous self administration system which forms the new system of stateless radical democracy that is re-organising society from the ground up.

Active right across the region and made up entirely of women, Aboriya Jin's work is to strengthen the role of women in society by building up the women’s economy, empowering women to become self-reliant, and developing confidence and collective autonomy. They are the main women’s co-operative development body in the region and are also supporting the foundation of communities and agricultural projects for families who have lost their main breadwinner in the war.

Book now
Back to events