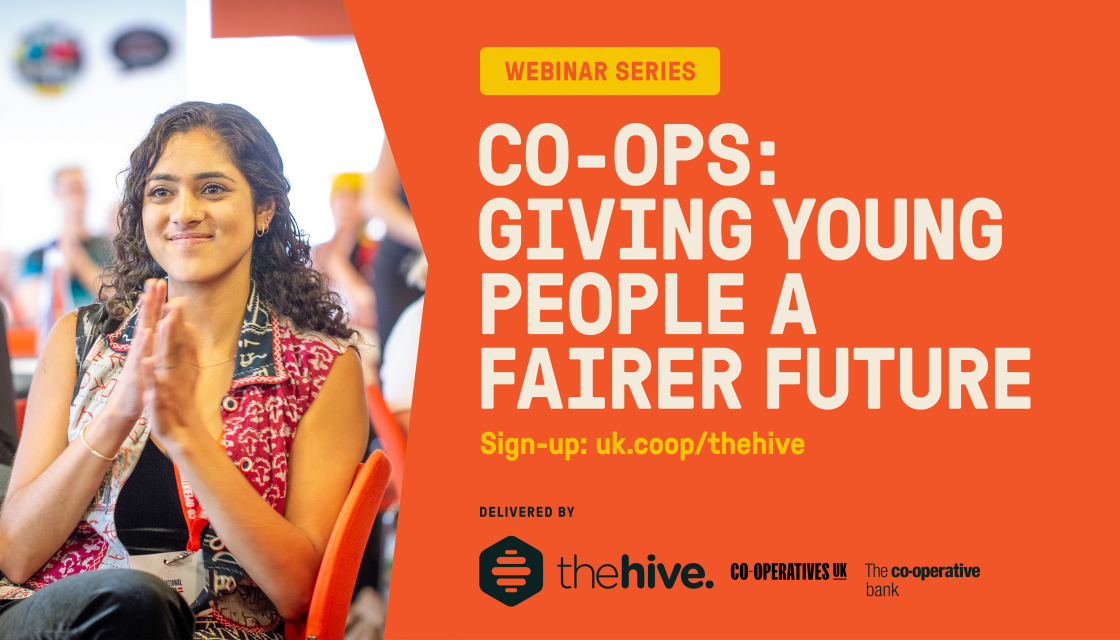 One of a series of webinars brought to you by Co‑operatives UK in partnership with The Co‑operative Bank as part of The Hive programme which supports new and existing co‑ops.

Offering Hope to Future Generations, a report from Co‑operatives UK, has found that mental health, job security, career prospects, a lack of control over working lives and climate change are major causes of stress in young people.

But there is a solution: co‑ops. The co‑op model gives members ownership and control, which aids mental health and wellbeing significantly. Co‑operatives allow young people to thrive in an environment that provides fair wages and secure jobs, tackles climate change and provides both educational and personal development alongside a sense of belonging.

Join this webinar to hear from young people who have set up or joined co‑ops and discover the benefits they’ve reaped from working, living and developing skills co‑operatively.

This webinar, hosted by Lenny Watson, introduces young adults to co‑ops. Lenny is a founder member of Sister Midnight, a community owned grass roots music venue in South East London. She will talk about her own co‑op experiences and introduce a number of speakers who will share how being part of a co‑op has improved their lives.

Young people keen to learn more about co‑operatives, this includes:

Lenny Watson. As the founding director of South London based community benefit society Sister Midnight, Lenny has spearheaded the organisation’s recent campaign to create the first community owned music venue in Lewisham. Sister Midnight raised an incredible £260,000 towards their goal and they continue to work towards creating a democratically run venue with the community at its heart. Lenny also works in co‑operative development and is training as a community shares practitioner.

Christopher ‘Buncey’ Roseby-Bunce is a worker-member of Suma Wholefoods co‑op and part of the Young Co-operators’ Network. His passion for worker co-operatives came from a distain for corporate greed. “Like many people, I was an expendable, undervalued and underpaid worker for too many years at a soulless corporation. I searched for a business that not only represented my personal ethics, but one which wouldn’t see my labour lining the pockets of invisible shareholders.” He found and became a Member of Suma, Europe’s largest equal pay and non-hierarchical worker co‑op, and has not looked back!

Content by The Hive
A series of FREE webinars to inspire people and communities to find fairer, more equitable ways of living and working.
Image

A chronic lack of awareness is damaging the ability of co‑operatives to provide answers to social issues faced by younger people.
News item
Image

New report ‘Offering Hope to New Generations’ outlines ways how a chronic lack of awareness is damaging the ability of co-operatives to provide answers to social issues faced by younger people.
Resource
Image

Surrounded by a supportive co-op team in a positive atmosphere, 29-year-old Steph found purpose and peace of mind during the Covid-19 pandemic, and beyond…
Case study
Image

A National Youth Summit has been called to offer young people the chance to explore radical solutions to the big topics of the day – from job security and mental health, to climate action and ethical…
News item
Image

When a graphic design graduate from Bradford became a member of two local co‑operatives, it boosted his confidence and skills – and opened the door to new opportunities.
Case study
Image

Thanks to the opportunities offered by a member-owned Manchester skatepark, teenager Louis Carroll has already converted his passion into his job.
Case study
Back to events