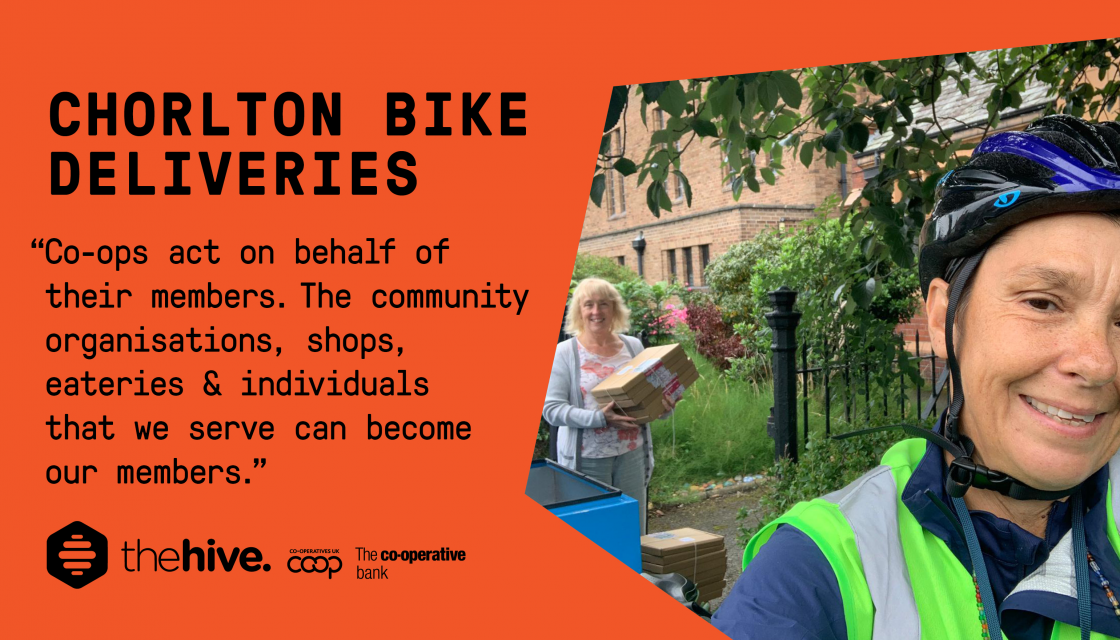 Chorlton Bike Deliveries Co-op has achieved a great deal in a short space of time. When the Covid-19 pandemic forced the UK’s first lockdown, the inhabitants of Chorlton in south Manchester took to the internet and set up mutual aid support groups.

It was there that the idea was formed to create a service to help local people at a challenging time.

“The co-op’s five core members didn’t know each other before lockdown. We met through the online group. We wanted to find a way to be more useful, to support the local community and the independent retailers and eateries in our area. The others were keen cyclists, so we decided to start a bike delivery service,” explains Abbie Paton, one of the co-op’s directors.

“It has grown quite a bit now and we have a number of retailers we work with,” Abbie continues. “It started out with us delivering to people who were isolating and shielding, the idea being they could phone the shops and the shops would get us to make their deliveries.”

Co-ops act on behalf of their members – and we were keen to work on behalf of the community. A worker co-operative model didn’t fit with that – and now the community organisations, shops, eateries and individuals that we serve can also become members.
– Abbie Paton, Director, Chorlton Bike Deliveries

As well as supporting local businesses, Abbie and her colleagues wanted to help the community in other ways too. Staffed mostly by volunteers, the co-op has given paid employment to some local people who found themselves without work due to the pandemic. They also transport unsold food from local stores to nearby foodbanks and deliver hot meals from food projects to local people in need of them.

“In the summer, people had grown more food on their allotments than they could use. So they were donating it to local cooks. We delivered the produce to the cooks. The cooks used it to make food for the vulnerable, which we delivered too. We’re part of the local food chain,” smiles Abbie.

“We also wanted to have an impact on pollution, carbon emissions and traffic congestion – and that’s why we deliver by cargo bike rather than by car.”

What helped make this possible was the expert guidance Abbie and her colleagues received from The Hive – the support programme for co-ops delivered by Co-operatives UK in partnership with The Co-operative Bank.

Hive provider Adrian Ashton delivered valuable advice that enabled the co-op to register, establish its articles of association and decide which legal form to take.

“Originally, we were going to be a worker co-op. Working with Adrian, we realised that forming a multi-stakeholder co-op was much more appropriate for our aims,” Abbie explains.

“The founders of the co-op all have public sector backgrounds, so Adrian’s business knowledge helped us explore different income streams – and it’s been really useful to have someone support us with the governance and legal aspects of forming a co-operative business.

“We’re considering whether to take our service city-wide as a possible future step. And it’s thanks to The Hive’s help that we’ve been able to create the solid foundations from which to grow and support more and more people and businesses.”

workshop
Apply to The Hive
Turn your ideas into plans, your plans into action
Next step
Related content
Image

Content by The Hive
Co‑ops that have been trading for two years or more – or those experiencing trading difficulties – can apply to The Hive for tailored support. Our expert advice will help you to sustain jobs, grow…
Image

Apply for support to convert to a co‑op

Content by The Hive
The Hive offers up to 10 days tailored business support, mentoring and training to help you understand the options for direct worker or community ownership – and the benefits this brings.
Image

Content by The Hive
The Hive is a support programme for UK start‑up and existing co‑op businesses, funded by The Co‑operative Bank. It offers free resources as well as a bespoke programme of support.
Back to case studies