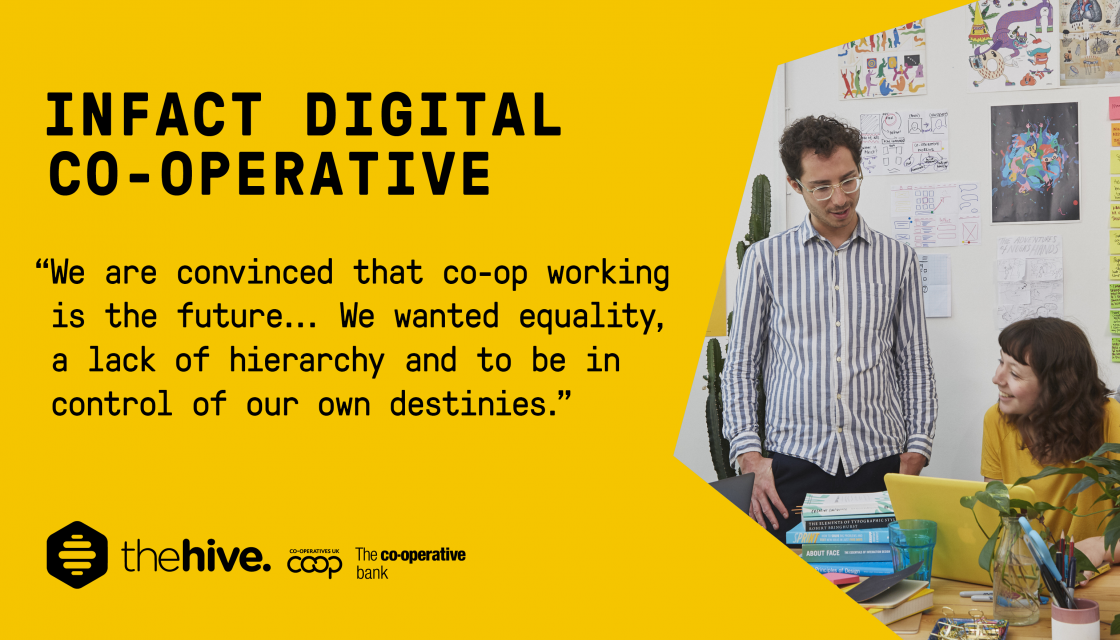 They met through a digital boot camp. Loved working together. And discovered a shared belief in the power of technology as a force for good.

From this, they formed InFact Digital Co-op – an agency creating apps, websites and digital tools for charities, non-profits and businesses.

InFact Digital Co-op includes developers Ivan Gonzalez, Lucy King and Max Gerber, and designer Noga Enbar. They began working as a collective of freelancers after meeting through London’s tech co-op community. The group are graduates of Founders and Coders – a free web development programme with social inclusion and co-operative values at its heart.

Co-op working is the future

"We are convinced that co-op working is the future; that more and more companies are going to move over to that model, or a form of it," says Lucy. "Traditional hierarchy is going out of fashion. We probably didn't ever consider setting up any other way. We wanted equality, a lack of hierarchy and to be in control of our own destinies."

"We also wanted to be able to make the decisions and do things that reflect our values and who we are. It didn't feel like we would get this by being anything other than a co-op."

So it was only a matter of time before InFact Digital Co-op decided to become a co-op. But how?

"Siôn was instrumental in getting us to the point where we were able to incorporate as a co-op business," says Lucy. "He’s a co-op veteran and his input and support was invaluable. It was great having someone to bounce ideas off."

"We took us through what we needed to do. The process was challenging in places. Siôn helped to break it down so it didn't feel overwhelming."

"There was lots of practical advice and it was great having the accountability. We knew what we had to do and achieve between sessions to get us to where we wanted to be."

Being salaried employees of their co-op business has made a big difference to Lucy, Ivan and Max. "It feels more secure, and we’re happy about that," Lucy smiles. "It’s such an amazing thing to create a work environment that makes us happy."

Being a workers co-op motivates us so much more. In previous jobs I'd have found it hard to motivate myself to do certain tasks, but because we're all in this together I am so much happier to do the 'day-to-day', from admin and client meetings to outreach.
– Lucy King, InFact Digital

Being a part of London’s co-op tech community has meant InFact Digital Co-op have been able to generate business with the help and support of their networks. So, after two years since starting out – and six months of being a co-op – they’ve now reached a place of stability. And they can start to put more focus on the future.

"We want to take on freelancers; take on projects for free and work with other co-ops. And the time has come to upskill ourselves so we can take on bigger projects. We can now think beyond the day to day and it’s exciting to do that."

"We’re grateful that the Hive’s help got us here. It enabled us to have a sense of structure. It's given us a pathway to follow and a mentor we could talk to about our worries – and find answers to those worries. It gave us the belief we could do it. And we did!"

UnFound is for founders looking for a different way to set-up and run a platform business. It brings together entrepreneurs that would like to develop their digital business in a more collaborative…
Back to case studies