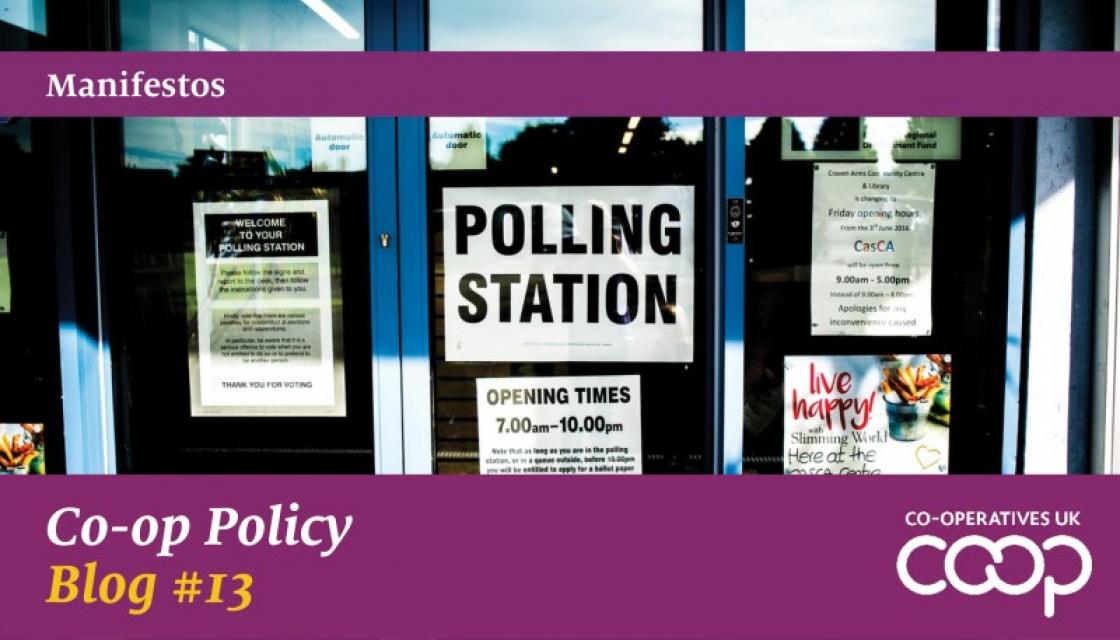 All the big players in Westminster have published their manifestos. Reading them gives us an idea of what the next government might do for co-ops. It also offers an insight into how much political support there is for co-ops just now.

The good news is that whoever forms the next government, the co-op economy is likely to benefit from supportive policy. If the Conservatives return to power, they’ll beef up their support for community ownership. If Labour get the key to Number 10, they’ll aim to double the size of the co-op economy.

The standout commitment here is a £150m Community Ownership Fund. We’d want some of this money to be used to match-fund Community Shares through an expanded Booster programme. This would help more communities to benefit from democratic ownership and control in their economy, including, crucially, those who need that power the most.

Conservatives would also continue their support for community-led housing.

A commitment to empowering communities in local economic decision-making is welcome. But recent experience tells us we’d need to work hard with our allies to ensure this results in genuine community-led economic development. More consultation and a seat at the table would not cut it.

Conservatives plan to carry out another Red Tape Challenge. We’d need to lobby hard for the specific issues faced by co-ops to be considered in this.

There would also be reform to insolvency rules. This is something we are currently helping government with, to ensure co-operative and community benefit societies are not overlooked.

Illustration Proud to be a Co-op
Want to keep up to date with all our policy news, campaigns, blogs and more?
Sign up for updates

The party has renewed its great commitment to doubling the size of the co-op economy. The primary mechanism for achieving this would be a new Co-operative Development Agency. Following extensive consultation with our members, the Board of Co-operatives UK has a position. We welcome plans for an agency and suggest how extensive partnership with the co-op sector will lead to the best outcomes.

Co-op growth would also be boosted by Labour’s support for community wealth building. This approach to local economic policy includes a prominent role for co-ops. And a new Post Bank would also make small loans to help local co-ops reach their potential.

Beyond this community energy, community car clubs and local food networks would all be targeted for support.

Here we find an excellent commitment to fostering a diversity of business types, including specifically mutuals. But the detail on how to go about this is a little thin. They say they would create a more supportive framework to develop social enterprise, which includes most co-ops, but that’s it.

There are also commitments to expand community energy and encourage the development of car-sharing schemes.

The Liberal Democrats also commit to empowering communities to take charge of aspects of their own local development.

It SNP manifesto focuses on the need for more powers to be transferred to Scotland and for a second independence referendum. They have not set out any specific policy relevant to co-ops.

The Co-operative Party is influential in informing the detail of Labour’s policy for doubling the co-op economy. So it’s great that its own manifesto contains sensible policies that reflect the needs and aspirations of real co-ops.

Crucially the Co-operative Party envisages a Co-operative Development Agency that works in partnership with co-ops and communities, as we have proposed. And we share the Party’s priorities for legislation and tax policy.

The Green Party would promote and support an increase in co-ops. It would increase awareness of co-ops, starting in schools. It would also help co-ops access finance through a new regional banking system. And it would also offer co-ops free energy efficiency training.

We have our own cross-party policy agenda to inform the work of any future government. It is based on evidence, gathered through consultation with our members and from research.

Our policy work is crucial to ensuring co-ops, of all shapes and sizes, enjoy the best possible business environment. We do this by working for and alongside our members to influence government policy…
Image

Co-operatives UK has published four ‘offers’ for building back better, aimed at a government worried about jobs and everyone working for a more just and sustainable future.
Image

It looks like we’re heading into a deep economic and social crisis. Many livelihoods and businesses will be destroyed. But business as usual was already an unfolding catastrophe; for the planet if not…
Image

Policy Blog #16: Join our fight for co-ops in the pandemic

For six weeks we have been fighting for co-ops to get the help they need to survive this pandemic. This includes lobbying the UK government to include co-operative and community benefit societies in…
Image

Budget 2020 includes a very welcome announcement for private rental housing co‑ops. They will no longer have to pay punitive taxes aimed at deterring the corrupt practice known as ‘property…
Image

As the politically independent voice of co-ops in the UK, we look forward to working with the incoming Conservative government.
Back to blog