Supported by The Co‑operative Bank 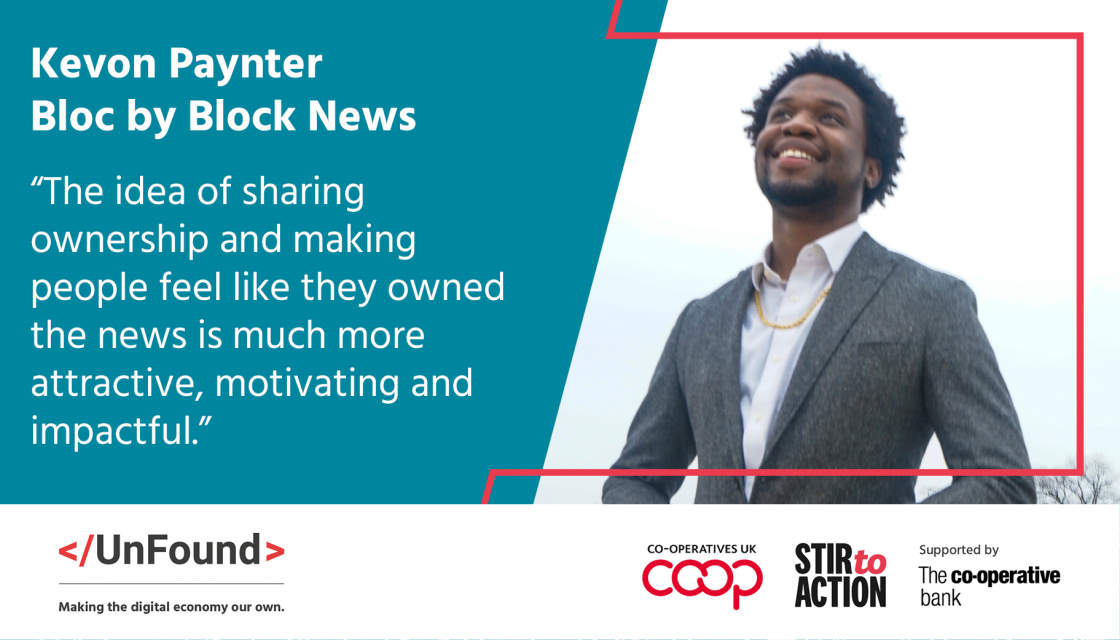 Bloc by Block News is a media co-operative and civic engagement organisation.

UnFound is a UK-based accelerator and business support programme for platform co‑ops. As part of our ongoing support of the programme, we’re publishing a Q&A series, in partnership with Stir to Action. The interviews are with a group of platform founders who share their experiences of building teams, raising finance, and user experience. See our UnFound Accelerator pages for more information and to find out when the next programme is running.

Bloc by Block News reaches its audience via a mobile app that helps the people of Maryland, USA, to tap into what matters most in their communities. Its mission is to uplift local news and neighbourhood voices.

We spoke to Kevon Paynter, Bloc by Block News’ founder. He’s an entrepreneur and journalist who’s written articles for Yes! Magazine and the Solution Journalism Network.

Work fast to bring your product to market and allow the rest to get figured out… also make sure you have something that people actually want.
– Kevon Paynter, Founder, Bloc by Block News

What gave you the initial inspiration and confidence to start a platform co-op?

I started working on Bloc by Block News while pursuing my journalism master’s degree in 2017. I was taking an entrepreneurial journalism class and our final project was to pitch a business idea. I had this idea for reconnecting people to local news through a mobile app that connected them to many different news sources and published great journalism.

So in 2018, a year later, the idea kind of bubbled back up into my mind and I got an email from a friend who said if I had any ideas, to pitch them to the Voqal Media Fund. It was my first time pitching the idea to people outside of the classroom and I ended up winning $30,000 to get started.

Later that year, I had the funds to start developing the idea further. I thought about how big it could become, and then I immediately started thinking about the celebrity culture around Jack Dorsey of Twitter and Mark Zuckerberg of Facebook. And I don’t care to be any of those folks. So I immediately thought about a co-operative and sharing that power and sharing that ownership and what it would mean to share the ownership around news in media and local news, which was very attractive.

In the platform economy, the initial unpaid labour involved in building a product is a trade-off for the promise of a big payout when the business is eventually sold to an external investor. How do you build a team where this option does not exist? Can you explain your story so far?

So for me, the attractiveness is sharing ownership and sharing power, especially around media and around news. As an African-American male, I remember when the news cycle was happening around Trayvon Martin in 2013, and I remember watching the news on CNN and Fox and not hearing many Black voices at the table. If I did hear any Black voices, they weren't necessarily representing my interests or my viewpoint. I remember feeling alienated by not being included. So the idea of sharing ownership and making people feel like they owned the news is much more attractive, motivating and impactful. It's why I want to make this into a co-operative rather than pursue a huge payoff by selling the company. Also, the deeper I go into understanding the co-operative model, I see a lot of successful, very high revenue companies that are co-operatives. So, I don't think you have to be a martyr at all.

The first year and a half it was me – a solopreneur – lighting the way and continuing to look for startup capital through grants and foundations. That’s been a challenge, but there have also been some wins. (I invite anybody reading this to contact me!) In 2020, I was able to start hiring a team to continue to build out some of the plans for the editorial. I was also able to hire designers to design the technology, create the screens for the mobile app, and work with engineers to figure out some of the technical requirements.

I also worked with a co-op specialist who helped me design some of the articles of incorporation in the bylaws. So here we are today. We have a lot of this development. The plans are ready to go. And I am pursuing a crowdfunding campaign to invite people to help us get started and support the coding and release of the app. Last year, we were able to have a team of about 11 folks. Today, we’re at about four folks, but I see us growing again.

Financing a platform co-operative is a challenge, but there’s excitement about testing existing forms of equity in the sector. What’s your funding mix and how do you see it changing in the next five years?

Funding is certainly a challenge. Let’s start where we are today. In 2021 we’re getting creative. We’re planning to launch a crowdfunding campaign to connect the mission and the purpose of shared ownership around local news to people who are excited about that mission and who will also eventually download the app and be those owners. So I see the crowdfunding campaign as a remarkable opportunity to publicly spread that message and also receive a round of start-up capital that isn’t dilutive.

In the past, I have found some success with going after business grant competitions and philanthropy. I will say that journalism philanthropy has been the hardest to win, which is surprising to me, because you would think that they would get behind something like this. Let’s just say that I invite them to turn that around.

I’ve been able to win from community foundations that care a lot about local ownership. And from the Maryland Humanities Commission, because they see how, in addition to the news, we also want to include town hall discussions around what’s happening locally and connect people to the history and the oral stories that make up where we live. So they’ve been able to get behind our message as well and provide some funding.

Platform co-ops are about rebalancing power but this can be unavoidably complex. How do you find the right governance model that offers a ‘cultural fit’ for your community and business purpose?

It’s totally correct. There are a lot of options out there for organising co-operatives. We ended up landing on a mix between the consumer co-operative and a multi-stakeholder co-operative. We decided on this model as we plan to include local news publishers within the shared ownership, as well as the people who download the app, and the residents who make up the state where we’re launching the app (Maryland). So we wanted to really unite a bloc of media, publishers and news audiences. We chose that name specifically – a bloc for what it means. So we plan to unite these two groups that haven’t always had the best relationship to improve that relationship and improve the news for residents.

I began to think about different models for organising. We’re kicking around different ideas like sociocracy circles and we’re still developing some of those participation methods. Stay tuned, we’ll continue to figure that out.

You know, Stir to Action has been helpful, honestly. In America, we don‘t have many examples, really. So I‘ve had to look globally and specifically I‘m remembering an infographic that really helped crystallise the steps towards co-operative formation for me. Then also the Platform Cooperative Consortium – being in a room of folks who are doing this was another really important moment in the journey.

In terms of business support services, I‘m also going to give a shout out to the community development corporations and community development finance institutions who really are embedded in the local economy and use a bottom-up approach to lending and economics. So I think there’s potential for them to be even stronger partners. We’ve been able to partner with the Washington Area Community Investment Fund, who explicitly got behind our mission around ownership – and especially for including the black community.

Based on your experience, what advice would you give to others who are at an earlier stage of becoming a platform co-op?

My advice would be to connect to some of the resources that I mentioned. Also, regarding a platform co-operative there is, in my opinion, a difference between organising within a traditional worker co-operative. I’ve seen folks really focus on the organising side of things in trying to gather the people and how hard that can actually be to just gather people with the time constraints and life constraints that people have.

I would, if possible, suggest that you bring your product to market. Yes, include the desires of the organisations and personas of people you want to serve in the initial designs of your product and services. But then work fast to bring your product to market and allow the rest to get figured out. There are organisations that go to market and then become co-operatives a little bit further down the journey. My advice would be to also make sure you have something that people actually want. It should be well-marketed and allow you to create the momentum you need to gather the workers into a worker co-operative or gather consumers or producers, whoever it may be.

More about Bloc by Block News

Have you got an idea for a digital or platform business?

Content by Unfound
Do you have a clear and compelling idea for an ethical digital business? Are you interested in setting it up as a co‑operative? Then we'd love to hear from you!
Image

How to start a platform co‑op

Content by Unfound
Every platform co-op founder’s journey is different. Here is a roadmap to help you find your way.
Back to blog