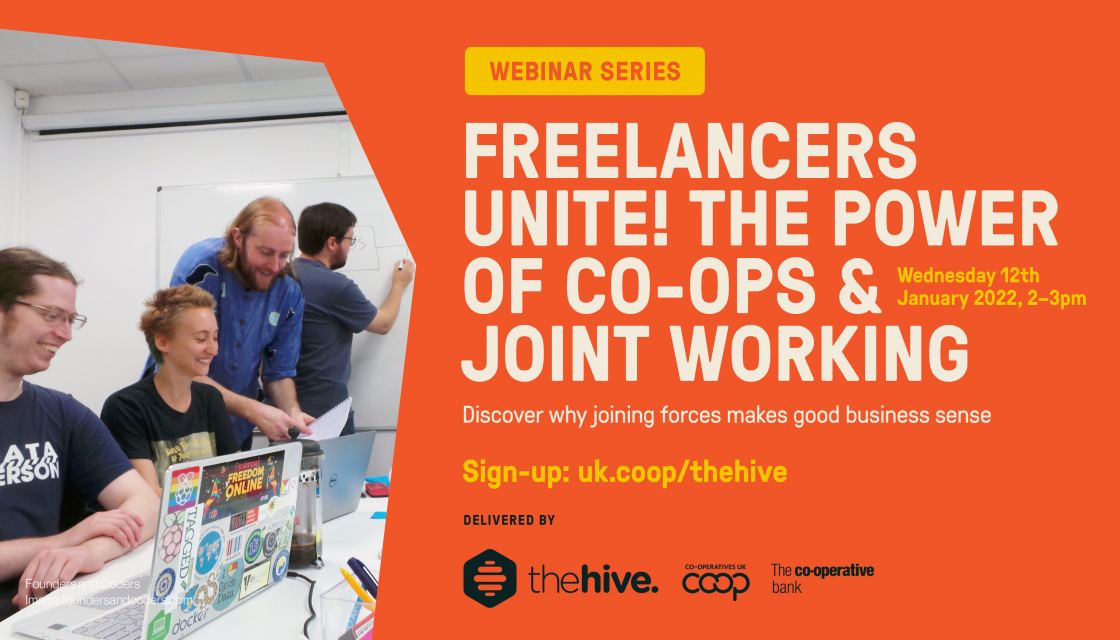 An opportunity for freelancers in any sector to discover how joining forces makes good business sense.

According to the latest official figures, there are some 5 million self-employed people in the UK – more than at any time since records began. That’s 15% of the workforce.

While many enjoy the freedom and flexibility of freelancing, for others, being self-employed is a necessity due to unemployment, falling job quality and precarious working contracts.

Whatever their reasons, the self-employed have this in common: they’re more likely to have unstable incomes and to miss out on social protections such as pensions, insurance and sick pay.

But there is a way to enjoy a thriving, autonomous and secure career: co-ops. Forming a co-op makes good business sense. Freelancers who’ve joined forces to set up co-ops have benefitted in many ways – from sharing costs, skills, knowledge and risk, to gaining new opportunities and enjoying peer support.

Co-ops enable members to have control over and access to fairer, more decent work, as well as a share of the profits.

By coming together, freelancers can bid for larger scale tenders, gain access to new markets and innovate through sharing creative ideas. They can pool resources, build greater brand recognition and increase efficiency. And there’s more than one way to do it:

Join this webinar to find out more about the benefits of joint working. You’ll hear from members of three co-ops that were formed to empower freelancers:

Aysha Haq is Agency Lead and Digital Marketing Consultant at Chapel Street Studios – a co-operative agency of freelancers and small businesses collaborating to provide a wide range of specialist creative services. These include web development, branding, design, photography, social media, marketing strategy and more. Aysha has worked for clients in a wide range of sectors, including the Google Digital Garage project.

John Gibson is a director of Felt Nowt Productions – a co-op of comedians that was set-up to grow the comedy circuit in the North East and create more work for stand-ups from the region. He’s a comedian and writer. And, as a professional programme and project manager, John has over two decades of experience across a number of key sectors, including manufacturing, travel and government.

Content by The Hive
This section takes you through the start-up process for setting up a co-op. Keep track of where you're up to, and look out for sign-posts if you need more support along the way.  Finally make sure…
Step by step
Image

Content by The Hive
Join our series of FREE webinars for people interested in starting a co‑op business.
Image

Content by The Hive
Organised by Co-operatives UK
Discover co-ops – their purpose and benefits. And find out if your business idea suits the co-op model…
Wednesday 19 January 2022
Event
Image

Content by The Hive
An opportunity for people in Scotland to discover how platform co‑ops can put power and profits in the hands of service providers, rather than tech giants.
Tuesday 25 January 2022
Event
Image

How co-ops can empower communities

An opportunity for groups across the Lancaster district and beyond to discover the power of co-ops to strengthen communities.
Thursday 03 February 2022
Event
Image

Content by The Hive
Organised by Co-operatives UK
Discover co-ops – their purpose and benefits. And find out if your business idea suits the co-op model…
Wednesday 09 February 2022
Event
Back to events